1. To spend more time on things I love (working out, volunteering, reading...) and less on things I hate (housework, jumping through the never-ending hoops of our health insurance, dealing with whiny children).

I think I succeeded in this to some degree. However, I think it was more a result of having slightly older, more independent children than from deliberate prioritizing. Judging from the state of our home this instant (still getting unpacked from NYC and taking down Christmas) housework sure took a backseat!

2. To find some much-needed career clarity. Yes. I have a plan.

3. A new car (or more realistically, a slightly-used version). We didn't get a new car this year, but I am ok with keeping more money in our bank accounts for now.

4. The passage of House Bill 83 (which would require health insurance companies to pay for autism related therapies. This would also help tremendously with numbers 1-3 listed above).

House Bill 83 failed in committee. Now that VA has elected a Republican governor, I have little faith that a similar bill will pass anytime soon. Further, the few states that have passed autism insurance mandates continue to have trouble with insurance companies paying out. On a positive note, we found a new university-run ABA-VB provider for Noe. The quality of the program has been excellent and costs are lower than our previous private provider.

5. Language, language, language!!!! (for Noe) Yes. Thanks largely to above mentioned ABA-VB program and the work of his private speech therapist. Still have a long ways to go, but we are pleased with his progress the past few months.

Sort-of. It's called preschool. Ed's work schedule (nights and weekends) has made it difficult to find a sitter, but we have been going out occasionally in the afternoons while Asher is in preschool.

7. To start seeing the change I voted for, and to find ways to participate in that change as well.

Wow. Was that a year ago already? I am generally happy with the direction of our country and was never under the illusion that all of our problems would disappear immediately after Obama moved into the White House. Would I be less patient if we were unemployed or about to lose our house? Probably. As for participating in change, I do feel like I am more conscious of my actions and we are more community-involved than ever....but there is always more to do! 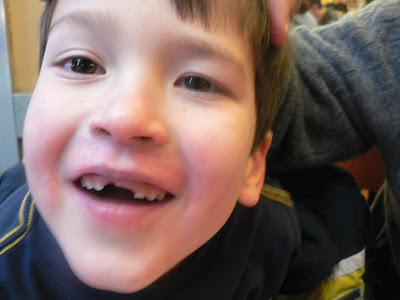 "All I Want for Christmas is my Two Front Teeth." -Noe

Of the six teeth Noe has lost, he has only handed over two of them. Perhaps he is hiding them away, waiting for the lost tooth market to recover before collecting his cash.
Posted by Jen at 8:36 AM 1 comment: 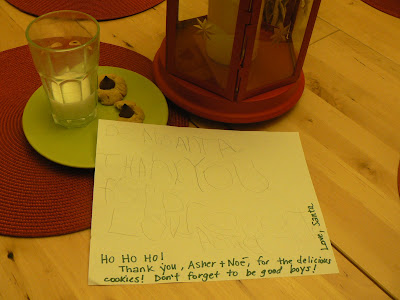 Asher wanted to type and print out his letter to Santa. I told him that Santa only reads handwritten letters from children. I'm pretty sure that kindergarten doesn't issue laptops (even in Fairfax County!) so the kid needs to get used to a pencil in his hand..... 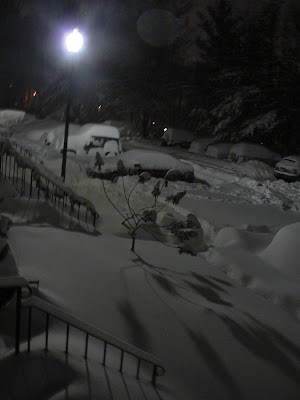 The week before Christmas, a huge snowstorm hit DC. We received close to two feet of snow, the biggest December snow storm on record for the area. It fell beautifully, but ultimately caused a lot of havoc. School was canceled for the entire week, along with holiday parties, church services and other fun activities we had planned. For me, it was a bit of a Christmas bummer. 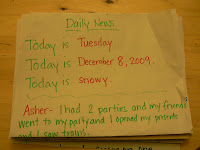 There has been an interesting development in Asher's life: a love of newspapers.

It's rooted in what goes on at his preschool, where his wonderful teacher gets a big sheet of paper out every day, titles it "Daily News" and writes up what is on the kids' minds. He loves reading about what's going on in his classmates' lives, and he's been asking his teacher after every class lately if he can "take home the newspaper."

Between this and his blossoming interest in typing on our laptop and agonizing over every word, I have a sinking feeling of where this is going. 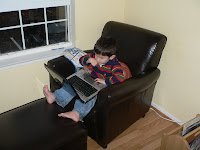 I can see us now, sitting out back on our deck chairs in 30 years after Asher has joined the Family Business and me lamenting what could have been, his Pacino to my Brando in a recreation of the garden scene in "The Godfather."

(Me, saying nothing, looking at him sadly.)

Me: I knew that I was going to have to go through all this ... (I sit down next to Asher) ... But I never -- I never wanted this for you. I work my whole life, I don't apologize, to take care of my family. And I refused to be a fool, dancing on the string held by all those -- big shots. I don't apologize -- that's my life. But I thought that -- that when it was your time -- that -- that you would be the one to hold the strings. Senator Guzman. Governor Guzman, or something... 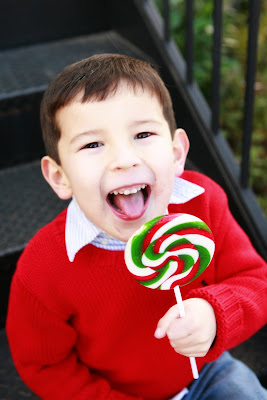 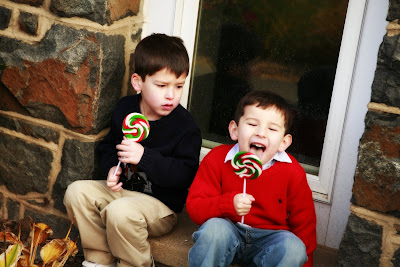 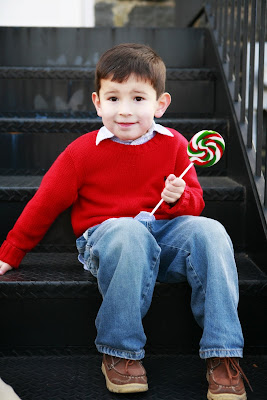 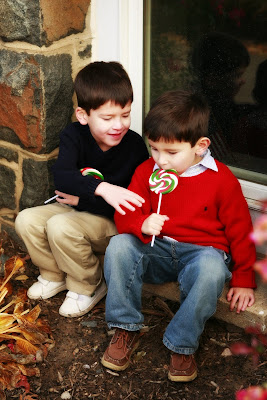 Yesterday, we got our Christmas tree. We drove a few miles and found a nice tree lot, not too kitschy, but not exactly in the middle of the forest either. I had to keep telling myself, "At least we didn't go to Home Depot." Although, that would have saved us about $30.

On the way back, with Asher shouting from the back seat, "Whatchu guys talking about?" Ed and I reminisced about our first married Christmas together.

We were living in Portland. Three months later Ed would be taking a plane across country for a copy desk try-out at the New York Times, but we had no inkling of our East coast fate. We did, however, know that Ed's contract at the Oregonian might not be renewed in a few months and I was in my last year of business school with few job prospects (this was back during the LAST recession). We were living a grad student lifestyle in a 6000 square foot home (the home that my mom and sisters had moved out of following my father's death). It was a strange set of circumstances to say the least. Behind our house was a tree-filled ravine with a creek at the bottom. Our great idea was to just chop down a tree behind the house to use as our Christmas tree. It was both quaint and economical.

Two hours later and bathed in mud, we had no tree. I think at one point I even fell into the creek. I guess there is a reason they grow Christmas trees on farms. Everything was too bushy or flimsy or way too tall. We drove to a tree farm instead and Ed cut down his first Christmas tree ever.

My other favorite memory of our Christmas that year was the story of my Christmas sweater. Besides my full class load, I worked almost full-time at the corporate offices of Hollywood Entertainment in hopes of getting a formal offer at the end of the school year. On Fridays, I didn't have class and worked a full day there. Early one Friday morning, just before Christmas, I was running late and trying to find something warm and professional to wear. I remembered that my sister had left some clothes at the house and so I went to look through her old closet. Inside I found a great Abercrombie & Fitch sweater. Definitely something office worthy and cozy. It looked like her style, so I didn't think twice about it....and knew she would never know the difference that I had worn it once.

Later that night, I returned home to Ed. I think he was preparing to go out and cover a game. When he saw me in that sweater, he just stopped and stared....trying to say something but unable. Finally, he got the words out. That was his Christmas gift to me. He had "hid" it in my sister's closet. Why he left it hanging in there with the tags off is still a big mystery. He obviously didn't understand that all rules of honesty and good manners are off when it comes to borrowing your sister's clothes!

I treasure that first Christmas. We were newly married, perfectly broke and unbelievably happy. It turned out to be our only Christmas together without children or the soon arrival of children. Our next Christmas was spent at an upper East Side Manhattan hospital, trying to fight off preterm labor. Noe would arrive just three days later. We have made it home only one Christmas since. We have definitely had our share of wonderful Christmas memories in the past few years, but that first Christmas will always hold a special place in my heart.
Posted by Jen at 11:59 AM 2 comments:

Four was good to you, kiddo. I actually hate to see the year go. This year you....

*learned to read and swim and ride a bike (with training wheels)
*improved your Spanish skills
*took two cross-country trips
*gave your first talk in primary all by yourself
*built 365+ (one every day plus a few extra) creative and unique train track configurations
*gained some seriously scary computer literacy skills
*learned to dress yourself (finally!)

*we find you asleep next to our bed most mornings
*you tried to convince me that your "trains" could say naughty words because there is no church on the Island of Sodor
*you won't wear clothes with any kind of print
*you think cheddar Goldfish are a major food group
*yesterday I slipped and fell down several stairs after you had hosed them down with "anti-Monster spray" because you are afraid to be downstairs by yourself
Posted by Jen at 2:46 PM 1 comment:

Today, I met Pierre Thomas. We were at the same kids birthday party. I've known and loved his wife for four years....our kids were in the same autism preschool class. And we've been autism mom friends ever since. Finally, today we discovered that our husbands both work in media and that she is married to a fairly high-profile journalist in the DC area (ABC Nightly News/Dateline/GMA). I guess we just always had more important things to talk about besides what our husbands do for a living.

We were downtown recently and saw a helicopter circling the White House. When I told Asher who was in the helicopter (although it could have been a decoy), he was hardly impressed. He was sure it was Sir Topem Hat and the helicopter was Harold.

I drove into the CIA Headquarters entrance again trying to get to Clemyjontry Park. I'm pretty sure that by now I have my own CIA file under the category, "Idiot Suburban Soccer Mom Drivers."
Posted by Jen at 2:53 PM 2 comments: