Lessons in soccer and chickens 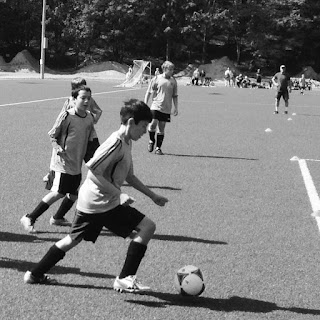 To be completely honest, Asher's soccer season has been kicking my ass.

Every year, the practices get a little longer, the tournaments multiply like lice. This season, I've been completely late to the game, in all respects of that statement. It doesn't help that Asher is also playing on an Ultimate Frisbee team this fall, the other official sport of Seattle. It doesn't help that Ed is away on Seahawks duty for most of the fall.

Today, we were on schedule for Asher's game. But then we forgot the water bottle. And then Noé refused to enter the car for ten full minutes. Suddenly, we were behind schedule. We headed towards Queen Anne, my Seattle neighborhood driving nemesis. If I'm not stuck in traffic, I get lost somewhere on that giant Ant Hill in the Sky. Today was a little of both. Asher rolled out of our moving Honda CRV as we reached the stadium, just minutes...ok, maybe seconds... before kickoff.  I searched for parking. Noé quietly contemplated how to make this game especially miserable for me.

Navigating Asher's busy schedule with Noé in tow requires a lot of logistical planning. I drop off Asher at practice, we play at the park with snacks on hand. Game day? I take Asher to his game, then find a nearby hike. We hike until halftime. I go back to the game to check on Asher and to see if he needs his inhaler, and to sneak in a quick high five. Noé and I go find a treat around the neighborhood during the second half, and then come back and watch the final five minutes of the game. I try and cheer extra hard so Asher will forget I'm not watching him the other 55 minutes.

I got a lucky break today. The stadium had a whole section of empty seating near the field where Asher was playing. Noé happily began stomping up and down the aluminum stairs, "thump...thump.... thump....splash...splash...splash." I found a wet bleacher and sat down.

Asher doesn't have a pro contract, or probably even a college scholarship, in his soccer future. But, for the first time all season, I really watched him play. And I was in complete awe.

His legs are growing and he has serious speed. When did that happen?

His coach is a yeller. But instead of getting down on himself, my sensitive kid kept his head high and did his best to follow his coach's instructions.

When he had a decent shot on goal, he push passed the ball over to his teammate, who had an even better look at the goal.

On the sideline, he cheered hard and gave out high fives to all of his teammates.

Today, they lost by three goals. It was indeed a rare loss for the Gold Division Lucky Chickens. Yes, that is their team name. The very best thing is when the coach shouts "Hey, Chickens!" at the top of his lungs and eleven tween boys turn their heads in unison.

But Asher hustled and ran down balls and slide-tackled opposing players until the final whistle blew.

The Lucky Chickens have played together for three years. They are not the most athletic or even the most skilled group, but their coach has taught them to work together within a system that enhances their strengths and minimizes their weaknesses. It is soccer's version of the Triangle Offense adapted to a group of rowdy, amateur and sometimes immature 11 year olds. The kids have bought into this system as their wins have piled up. They all have their roles, they all understand the rules of the system. There are no stars, truly. Everyone's role is equally important. A goal scored is a team success, a goal given up is a team failure. They win with grace. And today, they lost with grace. When luck is not on the Chickens' side, they identify the problem, and fix it. On the field. Together.

These are lessons that Asher, or anyone else, won't learn from a book or in a classroom and definitely not in front of a screen. Sometimes, we need to outsource the most important learning opportunities for our kids. And sometimes the best source of these life lessons is a crazy, hollering coach and his flock of tween chicks. Even if it means our evenings are spent in traffic and our dinners are cold and our weekends are booked.

I think I forgot all of this until today. When I got to watch my own Lucky Chicken and found some new perspective.

September is always insane in our house thanks to back-to-school, the start of Seahawks season, and my own work schedule ramping up in a big way. But once October hits, our family life tends to find a rhythm.  I woke up to a foggy and rainy October 1st morning today, ready to embrace autumn and the steady but predictable beat of our days. This despite my 6:45am Saturday morning wakeup call for Asher's 8am ultimate frisbee game. Why????….

Overall, we've had a good start to our school year. This has been a winning stretch for our little family. I feel like we are all thriving in our individual ways. Here are ten quick hits from our last month:

1. Noé has the most awesome teacher and staff in his classroom this year. And there is so much good happening in there every day. I am so pleased. I feel like a drooling fangirl every time I go to his school to speak with his teacher. I have almost forgotten the nine-month long migraine that was his 6th grade year.

2. Thanks to his awesome school setup, and a later school start time, Noé loves going to school this year. He has been getting up before Asher in the mornings and has been eating a good breakfast every morning. These are both alternate-universe phenomenons in Casa Guzman.

3. Asher's K-8 school is living up to its hippy hype. As he enters his classroom each morning, he has to tell his teacher "Namaste" and touch palms with her. They plot their mood on a grid. There is a lot of journaling. But, his rag-tag class of ten 6th graders have all become great friends and it is a very diverse and supportive learning environment. I try to hold my tongue.

4. I received an email from Asher's math teacher the first week of school introducing himself. He mentioned that he is calling him "Buzz", per his request. I am completely baffled. Asher has never been called Buzz by anyone. He just isn't a "Buzz." My mind starts wandering and wondering if he is trying to create a new identity at a new school with a new group of people? Do I know the real Asher, I mean Buzz???

A couple hours later, his teacher emails back with a whoops….wrong kid….explanation. We call him "Buzz" around the house now!

5. All transportation departments of large school systems have their issues, especially at the beginning of the school year. But Asher told me a funny/crazy story about the bus that many of his friends ride to school. The driver had just moved to Seattle the night before and drove her first route that morning. She got completely lost and the bus ended up at Seattle Center next to the Space Needle, which is a good four miles or so (and a LOT of Seattle traffic) away from his school. The kids were telling her she was going the wrong way but she kept insisting she knew what she was doing. Some of the kindergartners were crying. Finally, a school vehicle (the bus police?) arrived and the bus had to follow it to the school. They were two hours late when they finally arrived at the school.

6. Noé got off the bus at school one morning before his teacher could meet him. A massive manhunt around the middle school grounds ensued. Noé was found in his classroom, sitting at his desk, looking at a book. I suggested that maybe it was time for him to go independently to class each morning.

7. I decided NOT to hire another instructor to help me with my side STEM business, so I am teaching five LEGO robotics classes this fall. Trying to remember five classes worth of kids names when I only see them for an hour each week is the worst kind of Memory game ever. Those little buggers get really pissy when you call them by the wrong name.

8. Our friendly neighborhood heroin addict jumped out of the bushes as Asher and I were walking to his bus stop one morning. He started yelling incoherently and lunging towards us. Luckily traffic in both directions saw what was happening and stopped so we could cross the street immediately.

9. Ed's press pass for the Seahawks has 'No Autographs' written in bold letters on the front. There is an ongoing debate in our house about who is not supposed to give autographs…. Ed or the Seahawks.

10. Ed inherited the Seattle pro sports teams this fall with several of them on the verge of the playoffs (namely the Sounders, the Storm and the Mariners). We say a lot of prayers in our house that sound something like…."Please let the Mariners lose tonight so they'll be further away from playoff contention so Papi can spend next Saturday with us." We basically want them all to lose, except the Seahawks, because they make the paper a lot of money.

Update: The Mariners lost last night and are safely out of playoff contention! We obviously have some sway with God.

My kids are proving something to me that I've failed to believe myself. The middle school years don't have to be awful. In fact, they can be pretty awesome. I am taking their lead on this as I watch them learn and grow and change faster than ever.