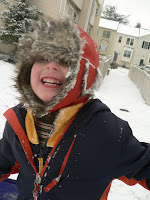 our first real snowfall of the year!
Posted by Jen at 11:49 AM 2 comments: 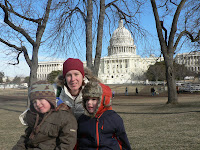 Obama's 1st Inaguration week, January 2009
with my own intern staff
Posted by Jen at 6:48 PM No comments:

Noe Is On the "Michael Phelps Diet" 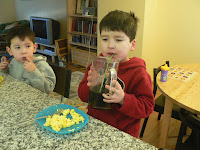 Most of you who followed the Olympics even casually this summer heard about the incredible exploits of Michael Phelps, who won a record eight gold medals in swimming. Phelps became an endless source of fascination, including the preposterous amount of food he supposedly ate.

Well, apparently Noe is going down the same road. We've got the boys taking swimming lessons this winter and as soon as we get home after each session, Noe proceeds to eat like there's no tomorrow. Just yesterday, I made six scrambled eggs thinking there'd be enough for the three of us. Nope, Noe ate them all. And as you can see from the picture, he also found a straw in the kitchen and helped himself to the whole pitcher of juice. Oh yeah, then he had me make him two pieces of toast with butter, which he scarfed down.

For such a picky eater, this has been a shocking development. Guess swimming really does work up an appetite.
Posted by Ed at 8:58 AM 4 comments: 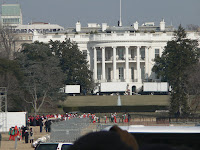 Yes, me and Asher were among the nearly 2 million people on The Mall today. And we lived to tell about it. As you can see by the picture above I took an hour or so before the swearing in (those moving vans inspired the title of this post), we were at about the Washington Monument, so about a mile from the U.S. Capital. But we were right in front of a Jumbotron and could hear everything just fine.

Yes, it was a bit of a hassle to get there, three hours door-to-monument. But Asher was a trooper, and the mood was festive despite the massive crowds. And incredibly, the commute home was smooth and easy. We were home by 2:25, or about two hours after President Obama said, "Thank you, God bless you and God bless the United States of America."

Yes, it was cold. Though to those who wondered how anyone could bring their small children out there, I have one word for you: layers. And here's two more: multiple layers. And it worked like a charm, as Asher never once said he was cold. 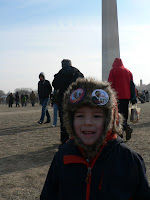 Yes, people booed George W. Bush when he wandered out on the dais. People who watched on television told me you couldn't hear it, but trust me: it was loud. Now, we weren't the biggest fans of his presidency, but I thought a little decorum was not too much to ask on this otherwise joyous day.

Yes, the moment President Obama completed the oath of office was unforgettable, cathartic, emotional, exciting... beyond words, really. And I was elated that I could share this moment with my youngest son, who like the president is of mixed heritage.

He was the reason we embarked on this adventure. Who knows what he'll remember from this day, but as I told him a little while ago as I tucked him in for the night, today was about knowing that he really can be anything he wants to be. At least for the moment, our new president is a shining example of this, of what we can accomplish when we go forth with integrity, humility and faith.

Late to the Memo

We didn't get the memo that MLK Jr. Day was supposed to be a designated national day of service until this year. I think last year we spent most of the day at the local bouncey house. The boys are getting older and my excuses are running dry, so we gave it a go:

*We took part in our community center's celebration, including listening to speakers, doing an art project and participating in a coat/canned food drive.
*We committed to adopt-a-trail in our town. I am hopeful this will be a fun family affair and not just another thing on my to-do list. I am also hopeful that the peops-in-charge of the program don't vet the blah condition of our own yard before we are given the charge of another patch of earth.
*Asher and Noe wrote and colored "thank you" notes to their West Coast family while I deep cleaned the kitchen (service begins at home, right?)
*I made a loan.
*I had the idea that we could do a family trail clean-up by taking a hike to the lake and cleaning up the trail along the way. However, I couldn't get the boys out the door. I think it was a combination of their Latin blood that prefers sun to snow, and that we kept them outside in the freezing cold all day yesterday to attend various Inaugural events downtown.
Asher and Ed are heading down to the Inauguration early tomorrow. We are determined to make him a part of history, whether he wants to be or not.
Posted by Jen at 7:07 PM 1 comment:

All that luck I was supposed to have this year after getting the cupcake with the plastic cow? Nowhere to be found.

*In a two-day period, our dryer broke, as did our dishwasher and our front stairs banister.

*During our first basketball game last Saturday, I lead a teammate with a down-court pass and as she ran it down, she turned her knee and, pending MRI results, likely tore a ligament.

*The other day I was running and a neighbor (not sure why I get religion about working out whenever the temperature dips) stopped to see if I wanted a ride. Unfortunately, she stopped very fast and a big truck was close behind. There was no wreck but it was very, very close.

*I have had the same sore throat and nagging cough since before Christmas.

I keep asking Ed if cows have any negative connotations in Mexican culture.

I think it would be better for the world if I just stayed under the safe and warm covers of my bed for a few days!
Posted by Jen at 5:53 AM 1 comment:

When Ed and I were first married and contemplating future family life, I had grand visions of elaborate celebrations of the major Mexican holidays in our home. Traditions that would forever bind Ed's Mexican heritage to our children.

Here is what our El Dia de los Tres Reyes celebration looked like this year:

*I made yellow cupcakes with chocolate frosting instead of the traditional Rosca de Reyes.

*I hid a plastic cow from the boys' train set in one of the cupcakes instead of the requisite baby Jesus doll.

*I meant to give one of the boys the cupcake with the "hidden cow" but accidently gave it to myself. This means that I will have good luck for the next year and I am required to throw a feast on February 2nd (Dia de la Candalaria). I already have it all planned out....it will be called "nightly dinner" and I will cook "whatever is in the fridge."

*After school, the boys found leftover Christmas candy and a little bit of money inside their GAP leather boots (they are supposed to find candy and gifts in their shoes when they wake up).

*We read our new favorite Christmas book (ok, it's more of MY new favorite) as well as our beloved Tomie dePaulo favorites.

My Life is a Freakin' Spelling Bee...

All day long from Asher....

"How spell......?" "How spell.....?" It was endearing at first, but when he yells from his bed "How spell grill cheese saaawiches?" when he should be fast asleep, (as he did last night) it feels less so. It also makes my brain hurt by the end of the day, visualizing word after word and recalling the correct spelling. It reminds me of the headaches I would have when I was studying abroad in South America and trying to learn some fast, mad Spanish.

Sometimes he will ask me to spell a word and I'll get distracted and misspell the word. Asher will get a sly smile on his face and say, "Close", then proceed to spell the word correctly. "Little dude, why are you making me spell words you already know?" I want to know.

He can spell gorilla. He can spell astronaut, dancing dinosaurs (thank you Starfall), and every kid's name in his preschool class. His mind is built for this stuff. Which is great....it's wonderful to have a kid who just gets how to learn....it makes me less guilty for focusing so much of my time and effort on the other child who doesn't pick things up so quickly.

But just like every kid, Asher has a couple of really big strengths, a lot of things he does fine, and has a few things he needs to work on. I'll never understand how a 4-year old who can spend 30-40 minutes at a sitting reading and sounding out words can't find the focus to put his socks on for 10 seconds. Or even more worrisome, a child who has spelled "boy" and "girl" since he was two years old, and can't consistently figure out the correct gender of those around him.

The NYTimes has a name for people like me, and I finally have a comeback for everyone in my family who thinks I'm just plain cheap.

frugalista (def): a person who lives a frugal lifestyle but stays fashionable and healthy by swapping clothes, buying secondhand, growing own produce, etc.

Well, I don't know if I have the "fashionable" part going on, but I definitely got the "frugal" part right.
Posted by Jen at 7:15 PM 1 comment:

1. To spend more time on things I love (working out, volunteering, reading...) and less on things I hate (housework, jumping through the never-ending hoops of our health insurance, dealing with whiny children).

2. To find some much-needed career clarity.

3. A new car (or more realistically, a slightly-used version).

4. The passage of House Bill 83 (which would require health insurance companies to pay for autism related therapies. This would also help tremendously with numbers 1-3 listed above).

7. To start seeing the change I voted for, and to find ways to participate in that change as well.
Posted by Jen at 6:44 PM 1 comment: