Stand and Deliver, Again and Again

As Jen has pointed out on this blog a time or two, I have deep East L.A. roots. I was born there, grew up there, my parents still live in the same house. And though my life and career have taken me to faraway places, it's ingrained in me. And now that I have children, it's been great sharing this part of my identity with them, showing them where I came from.

It wasn't always this easy to reconcile where I came from with what I was trying to achieve. A good friend I went to school with in our neighborhood once told me that living in East L.A. is like being a crab in a barrel full of them. In other words, as one draws closer to the edge, nearing escape, the other crabs will pull it back in.

Some of us were strong enough to get out, like this friend I mentioned. We were blessed to have strong families who loved us no matter what, even if they didn't fully comprehend what we were doing. They knew we were trying to do the right thing, make a better life for ourselves. We also had teachers in our lives who believed in us and taught us lessons that went beyond the subject matter at hand. They taught us to have that desire to achieve our dreams.

One such educator, quite possibly the most famous one to come out of East L.A., died Tuesday. Jaime Escalante, who was etched in the pop culture tapestry forever by Edward James Olmos' portrayal of him in the 1988 movie "Stand and Deliver," had been battling cancer in recent months. He touched so many lives, including those of his students, whom he pushed to extraordinary heights in his AP calculus classes.

Even those of us who did not have him for a teacher felt his influence. I always remember watching this movie for the first time with my parents, absorbing this uplifting story of ganas, desire, and what you can acheive with it. And the best part, at least for us, it was happening in our neighborhood! Really? In East L.A., you can dream big? It was quite a revelation. As Olmos himself said after the movie came out:

"Jaime exposed one of the most dangerous myths of our time - that inner-city students can't be expected to perform at the highest levels. Because of him, that destructive idea has been shattered forever."

Baseball great once said, "A life is not important except in the impact it has on other lives." Undoubtedly, Mr. Escalante achieved this sentiment. And even though he has passed away, his life will still continue to be important, thanks to all those he inspired (directly and indirectly) and it will continue to impact other lives, thanks to those lessons learned that we pass on to our children. 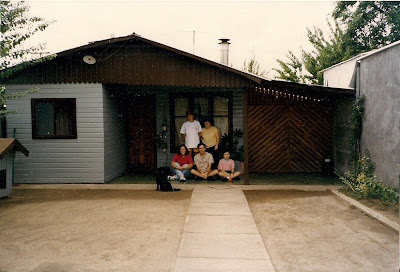 A few Saturdays ago (February 27th to be exact), I woke up to terrifying news of the 8.8 magnitude earthquake that hit Chile. I immediately thought of my host family, whom I had lived with for six months while studying abroad in 1996. Then I remembered the frequent small quakes I experienced during those six months, which I eventually learned to ignore, because that's what you do when you live smack on top of a major fault line. Then I remembered the great earthquake in Chillan back in the 1930's. It destroyed the town of Chillan Viejo, killing 30,000 people. They eventually rebuilt the entire town of Chillan a few miles away. There are monuments and statues dedicated to those who lost their lives during that quake in the plaza near my family's home. But that was almost ancient history, right? It couldn't happen again...

And then I looked up where the epicenter of the quake had occurred. Maule. No more than 40 miles from Chillan and my beloved host family. 40 miles! This is when my real panic began. I woke up Ed in my tears, which soon escalated to sobbing hysteria. I had grown close to my host family and absolutely adored my host brothers: Alonso (age 15), Roberto (13), and John (9). They were my constant companions as I learned to navigate a new town and university speaking only limited Spanish. Each left me with a farewell greeting and a kiss on the cheek (customary, but nonetheless charming). They let me hang out with their friends and attend their parties, and they taught me all of the Chilean slang and customs I needed to know to survive the next six months with minimal gaffs and embarrassment (but I just have to tell you that when someone in Chile asks if you like to ski a lot....it might have a completely different meaning than you expect).

Their parents, Maria and Alonso, were good, hard-working Chileans. They had limited means but much hope for the future. Maria cared for their small home with pride. Alonso worked long hours at odd jobs to provide, traveling back and forth on an old ten-speed bike. Both sacrificed for their children's education and most all of the money they earned housing me went to pay for the boys' school fees. I was always embarrassed that I had my own room and the rest of the family shared a single room with two beds. I constantly invited them to share my room....but rules were rules. The university said I must be provided my own bedroom and they refused to break the terms of their agreement.

A couple hours of Telemundo later, I had calmed down a bit. There were relatively few deaths in the quake, nothing like the disaster in Haiti. I knew they were alive, but feared their house was destroyed. I wasn't sure of their financial situation. Would they be left homeless and destitute? I desperately wanted to talk with them. I had not spoken with them since shortly after Noe's birth. I was embarrassed that I had let so much time pass. On a lark, I looked up my brothers on . I couldn't believe it! I had not seen a single computer my entire six months in Chile. I had to travel downtown just to find a fax machine. And here were all three of my host brothers on Libro de Face!

In less than three days, I heard from all three of them. They were fine, their family home had been damaged, but not destroyed. Chile has a strong foundation, a country on the verge of 1st world status, and the earthquake proved this to me and the rest of the world. The country was well-prepared for this quake....it could have been so much worse. My brothers, who started their accounting classes in grade school using accounting ledgers from the 1950's, were all three college graduates, tech-savvy, fun-loving and good-hearted men. Alonso, the oldest, has a great job in Santiago with a large accounting firm. The other two work in accounting in their hometown of Chillan. When I lived in Chile, the country was only a few years removed from the Pinochet dictatorship, still on unsettled ground politically and economically (not to mention geographically). The past decade has been good to them, and I have no doubt that Chile will continue to thrive, in spite of this recent crisis.

We have a coin jar in our home with a Chilean flag glued to the front. Every night our loose change and bills goes into that jar to help the recovery effort. It is a small gesture, yet symbolic. A way to contribute. A way to remember my host family until we can visit them again. A way to introduce my children to this country and this people that changed my life forever.

heard on the playground.....

Asher enters the playground. Spots a friend who is playing with another little boy.

Friend (looking up at Asher, speaking to the boy he is playing with): Hey....there's my best friend! You gotta come meet him!

They both run over to Asher.

Asher recently shoved this book into my lap. It was my favorite childhood book, and I was surprised to see it because I was sure it was back living at my mom's house, not with Skippy Jon Jones and Flat Stanley in the boys' bookshelf. So I read and reminisced.

Molly is the big sister rabbit of many little rabbits. She tries to be a patient and loving big sister, but her younger bunny siblings constantly destroy her belongings and invade her privacy. Finally, she is fed up and moves across the meadow to a little bunny cottage built for one where she discovers the bliss of a family-free existence.

As a child, I was Molly, minus the patience. Every year or two a new little bunny would arrive at the hutch, and I would have to cling a little tighter to my stuff, and search out another quiet corner to call my own. My brand new first-day-of-school notebooks would inevitably be scribbled in. Little fingers would rip out the tape from my cassettes and wind it around my room like party streamers. One year, my youngest sister even unwrapped all of my birthday presents.

That book was a shining light of hope. Hope that I might someday be able to move away and enjoy a peaceful life full of picking berries, baking giant carrot cakes, and enjoying long swims in a pond (I'm not even sure I had worked out the non-rabbit equivalent of independent living at that point). When Steven Kellogg (illustrator of the book) came to my elementary school, I proudly had him sign my copy of Molly. Getting that book signed was the sealing of my fate. It would happen. I would find a life away from the hutch. Steven Kellogg said so!