A super quick list of Noé's progress this summer…..

1.  Spelling simple CVC words on his iPad communication device (hat, cat, car…)
2.  8 mile + elevation hikes (he could probably go much further if he wasn't limited by…us)
3.  Dresses himself independently (still needs to figure out which way to wear his shirt!)
4.  True interaction with his brother and other family members!
5.  Smiles for the camera on cue
6.  Follows directions more precisely and consistently….his receptive language has made a huge leap this summer!
7.  Loves to help me bake in the kitchen….follows instructions well and doesn't make a huge mess with ingredients. 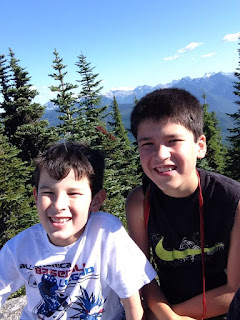 It's now been more than 10 years since we received Noe's autism diagnosis. In the time since, through four moves and three different jobs, I've wrestled with how best to connect with him. He is my first-born son, and I love him deeply, but there was something that was lost when that diagnosis hit our family like a tsunami wave.

My wife Jen articulated this feeling of loss very eloquently in a post on this blog last year. There have been good days, hopeful days and downright awful days. The feelings of stress and guilt, wondering if there is more you can do, wax and wane depending on the week. Through it all, though, our family's still intact, with Jen and I coming up on 14 years of marriage later this month.

But sometimes I still wonder: am I getting through to Noe? Does he really know I love him?

Don't get me wrong: we've had our moments. They've usually revolved around music (I took him to a Bob Dylan concert when he was 6) or outdoor activities (Surfer's Healing will always be a highlight). And those hopeful days give you the fuel necessary when the less hopeful days inevitably take place.

This summer, we've been fortunate to have extended periods of quality time, and I've seen those familiar themes re-emerging. I got a record player for Christmas last year, and it's been fun adding to and playing our vinyl collection. Noe has his favorites (Amy Winehouse has been on heavy rotation) but he's also picked up on my infatuation with Miles Davis' music. Jen told me the story that after I left to go to work after we had been on vacation for two weeks, he pulled "Kind of Blue" from the shelf and handed it to Jen so she could put it on the record player.

"I think he misses you," Jen texted.

Speaking of Winehouse, I also recently took him to see "Amy," the documentary about her life. Those who know us well know that the movie theater has been a non-starter for Noe. While his younger brother has been to every Pixar movie under the sun, big brother tends to find the movies a giant bore (and for us, an expensive waste of time).

But in my ever-continuing quest to connect, I gambled on a Sunday matinee. Much to my pleasant surprise, he sat patiently and loved it. As the picture below shows, he seemed smitten. 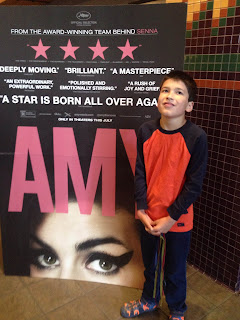 As for outdoor activities, hiking has become the activity of choice for Noe this summer. A four-plus mile hike on something called Damnation Creek Trail? Bring it, dad. About an eight-mile round trip with an elevation change of 2,200 feet on the Beckler Peak Trail? My pulse barely changes, old man.

Noe was our happy hiker, and I was happy to have found more common ground with him. Sure, it was more than 5,000 feet above sea level, but beggars can't be choosers. And to see those smiles on those brothers pictured at the top of this post, it was more than worth it.

A writer of some renown whose work I admire once told me about fatherhood, "There is pain -- there always will be -- but there is hope." And I suppose that's been the lesson for me from this summer. With Noe, challenges remain, the future remains at least partly unknown and in December he'll officially become a teenager. But I remain hopeful (and grateful) for those moments when it looks like we've made a connection, when that common ground feels just a little firmer.

Now, if you'll excuse me, I've got to put some Miles on the turntable... 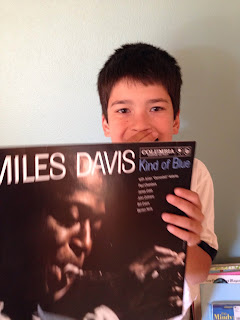 My Brother, the Cop 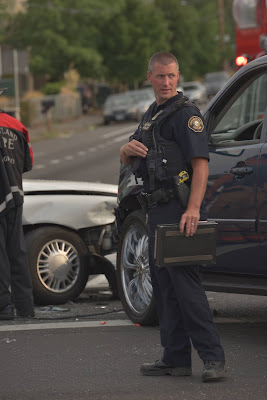 It is hard to deny that there is a lot that is wrong with policing in America today.  Our system of justice does not serve racial minorities and other outliers of society.  A lot needs to be fixed and righted…and I don't pretend to know where we should even start.  But we certainly need to try.  We owe it to those individuals who have been treated poorly, falsely imprisoned, or even killed at the hands of officers who have misused their power, to start this process of change.

But there is another story of policing in America.  It is one that is much quieter, and not likely to make the front pages.  It is a story of men and women, committed to their careers, to their families, to their country.  They face each work day, having no inclination what it will bring, with courage and dependability and grace. They work in the peripheries and darkest corners to keep us safe.  And they mostly succeed.

One of these police officers is my brother who works for the Portland Police Department, East Precinct.  I am extremely proud of him and the man he has become.