I cycle through blogs a lot. Right now, these are my favorites: Coincidently (or not so much) all three bloggers are from Portland. Easy Ed calls it my Portland p*rn stash:

Get Rich Slowly: I love this blog because J.D.'s personal finance advice is practical and honest, he has a nice writing voice, and his motto is "Do what is best for you." It has really helped me find a balanced approach to saving and spending money (my tendency is to live as cheaply as possible, which can create problems).

Made By Joel: I'm not very crafty, but I like to admire his projects. I have done a couple with the boys, but mostly I leer at his work, think what an awesome stay-at-home dad he is, and how fun it would be to be Portland neighbors with him.

Design Mom: I've read this blog off and on for years. Design Mom's family is spending a year in the French countryside and I am captivated. In fact, I wish she would blog more about her adventure in France and less on the cutesy, crafty stuff or on yet another high-end children's clothing boutique. Design Mom sends her kids to French schools and they do an amazing amount of traveling for a family of eight. She glosses over the challenges (I'm sure there are many), but I'm sure this year will set the tone for the rest of her children's lives, plus give them a foreign language under their belt. I don't see this jet-setting lifestyle in our realistic future, but I wish it could be. 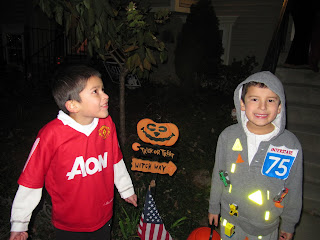 Well, we survived the fall holidays! Halloween went per usual, albeit with some leftover snow on the ground. I dressed up Noe as a soccer player, so he could trick-or-treat without the trauma of wearing a costume. Asher was a "road map." We found the idea online. Asher loved it and I loved the price ($5 spent) and how easy it was to put together. Plus, I used reflective tape for the "road" which means I could spot Asher instantly amongst the Halloween crowds once the sun went down. Homemade Halloween costumes are the best, even if mine never look very impressive!

And yes, miraculously, for the eighth Halloween in a row.... Easy Ed had to work and I got stuck on Halloween duty sin ayuda. 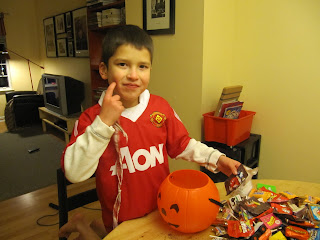 Here is Noe getting into the spirit of the holiday, happily signing "."

We celebrated our traditional Reston Thanksgiving, which ..... as long as I don't think about my family in Portland celebrating together....I have come to enjoy. First, we start the morning with a service project. The community center across the street from our house holds a project each year which involves sorting and loading food donations for area food pantries. It is a lot of fun to help and even the kiddos can participate. Next, we ice skate at the Reston Town Center Pavilion. Finally, we sit down and eat our meal. I made everything, minus the pies, and it was pretty darn good. I was commenting to Easy Ed that my Thanksgiving meal cooking skills star has risen dramatically since our first couple of holidays on the East Coast. He barely acknowledged my comment between bites, which I'll take as a good sign. 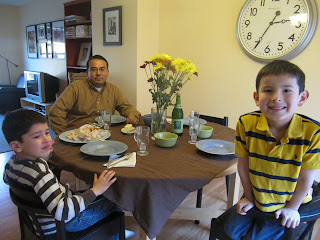 Note clock: One hour and counting until Ed has to leave for work. But we still had a nice holiday together!

I've been on a polygamy kick as of late. I found this book at KramerBooks ( Circle) and since I've never not loved a book in that store, I promptly picked up a copy for free at the library. And, despite the awesome title, I didn't love it. The plot was interesting enough to get me through to the end, but the characters were dry and not very compelling. I just didn't think about them when I wasn't reading the book, you know?

And thanks to Netflix streaming, I managed to watch the entire first two seasons of Sister Wives. And then promptly looked back at all the hours of my life lost and thought, "I can't believe I watched the whole stupid thing!"

And then there are always some of my favorite blogs that often have interesting commentary and perspectives on polygamy.

Strangely, even though I grew up LDS, I never thought too hard about polygamy. The church's polygamous history never particularly bothered me, as it does many. I just thought of it as a strange practice from the past that had no real relevance in my life. I completely understand (at least intellectually) why people are still upset by this early church practice and even lose their faith in the church over it, and I think their concerns are completely valid. But for whatever the reason, it's never been my issue. Maybe because my list of issues is already long, and adding one more might tip me over the edge. Just kidding....I think.

Anyways, while reading about 19th century polygamy is strange and fascinating, I think modern-day polygamy is diabolically unreal. I just can't believe that people live this way in our current day and age. But according to TLC, they do!

Here are some of my thoughts and questions as I've watched and read.....

1. Why don't we just decriminalize polygamy? Doesn't making it illegal actually perpetuate the abuse in the Warren Jeff-like sects because they live such an insular life? Won't decriminalization take the abusers out of the shadows? But then again....these groups seem to have no desire to join the rest of the world, so it would likely make no difference if their practices were legal or not. It's hard to know if polygamy can even exist without widespread sexual/physical abuse....it sure does seem to breed in these communities more than others.

2. Are Utah police really hunting down polygamy families (Season 2: Sister Wives)? Or was the threat made up by TLC producers to create good television, and the Brown family never really had to leave Utah? The family was operating under the assumption that at the end of investigation, the father would be thrown in jail and the family would be permanently separated. Yeah, their living situation is weird. But without suspicion of any abuse, it seems so wrong (and a waste of police resources) to break up a family.

3. Why are Utah Mormons so outraged by modern-day polygamy? Not by the Warren Jeffs (completely justified) but by the super-sized house down the street? Is it a constant reminder of an ugly part of church history? Do they feel like if they don't hate it....they will always be associated with it?

4. I've concluded that for the man, polygamy really isn't about sex, or even love. It's all about power and prestige within their polygamous group. It's really not a whole lot different than people who have lots of kids or cars to increase their prestige within their social group...except a lot more complicated (and expensive). I have no idea what attracts women to polygamy. Tradition? Sisterhood? Self-hatred?

4. The women of Sister Wives do their best to show they are modern women (at least in the Utah Valley sense of the word). Honestly, you could not tell them from the middle-aged women singing hymns in Relief Society by their dress and mannerisms. But they are fooling themselves. They are hindered by the wants and needs of their other sister wives, all of the children, and their husband, who has the final say, in even the most "modern" of polygamy situations. They call it sacrifice. I call it powerlessness.

5. However, I get a slight twinge when I see the women on the show living and working together. My current life in many ways is a woman-less existence. I work in an all-male office. I am alone with my boys when I am not at work. I have little time for girlfriends but miss friendship with other women. It would be pretty awesome to work and be around other women more often. Although, I am confident I can accomplish this goal without becoming a fourth wife.

I'd better go for now. My sister-wife just told me she is waiting for the laptop. Apparently, we are low on canned beets and need to reorder. ;-)