2018 is cooking dinner in my kitchen with my earbuds plugged into Pod Save America - raging at DT in my head along with the Pod boys. It is going about my regular day, smiling at regular people, working a regular job, while the world might be crumbling around me. It is a state of constant helplessness with occasional commercial breaks of action  - a protest here, election canvassing there, donating to a cause over here. It is utter guilt for the ease of my uninterrupted life while so many others suffer. 2018 is sipping my morning chai and looking out my front window at my beautiful neighborhood, and beyond that - a dream city, and feeling peaceful and happy and lucky but also the slightest bit empty.
Posted by Jen at 2:12 PM No comments: 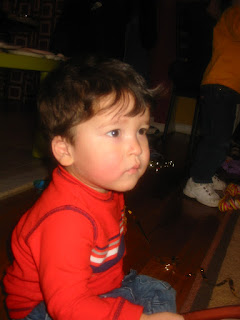 I've been working on a photo project: Familia Guzman, the New York City Days. I have photos from that time period scattered in boxes, on my external hard drive, in random emails, and I wanted to put them all together into a book with some creative order so we could enjoy looking at it. I imagined us all snuggled together on the couch as a family, the glow from our fireplace lighting our faces as we laugh and reminisce. Or something like that.

So last week, I started compiling photos on blurb.com in hopes that I could create a family photo book in time to wrap up and put under the Christmas tree.

Spoiler alert: Due to a minor emotional breakdown, I did not make my deadline. It's gonna be a Valentine's Day gift now.

Instead of creating a cute family photo book of memories and nostalgia, I've had a week-long flashback to the hardest couple years of my life.

Because I gave birth to Noé six months after we landed in NYC, and Asher was born two years later, and we were only there a total of four years, much of the book is Noé-centric. We collected hundreds of photos of Noé from ages 0-3. I began to pick through all of his earliest moments with a fine-tooth comb.

I'd always wondered if I had given him enough love and attention during those earliest years. Maybe I was a frigid mom? I wasn't ready for kids. I was finishing up my MBA when I discovered I was pregnant. The reality of my pregnancy surfaced after I ran out of a class presentation just seconds before throwing up outside the University of Oregon Business Administration building. A blood test confirmed it soon after. Noé was kind-of dropped on us, like an Amazon package arriving on your doorstep that you were sure you hadn't ordered.

I wondered if he smiled. I wondered if he was disinterested in me and in his surroundings and had other obvious autism markers, but I was too absorbed in my own life to see this reality. I just couldn't seem to remember anything with exact certainty from that time period.

It was a huge relief to unearth a happy baby from those pictures. And, for the most part, a baby that interacted normally with the outside world. I held him and he liked being held. He smiled, laughed, pointed and played. He looked at his board books, stacked his blocks and played peek-a-boo like a boss. Sure, looking back, there were some obvious differences. He was obsessed with certain things: watching the ceiling fan in our apartment, putting his hands in running water. He was the worst sleeper in the history of babies. He didn't babble nearly as much as other babies his age.

I now have photo evidence of when everything changed for him - shortly before his second birthday. He no longer looks at the camera and smiles for pictures. He looks slightly disheveled and confused.

I remember taking him to an easter egg hunt with many of his little pals from church when he was 2 years old. All of the other toddlers are running around filling their baskets with bright, plastic eggs, but there is Noé, alone in the corner, peering through the wrought-iron fence, mesmerized by the cars racing past on the adjoining street. I hand him a plastic egg and he throws it down. Then he picks it up and throws it down again. I show him how to put the egg inside his basket and how to pull it apart to discover the treat inside. He toddles away.

It is now time to take group photos. All of the kids smile brightly at the camera and show off their overflowing baskets. Noé has turned himself away from the camera, his basket hastily discarded in the grass.

It was so easy to dismiss his strange behaviors and ever-growing developmental deficits. Oh, his world was just rocked with a new baby brother. Oh, he was premature, he's still catching up. Oh, his father was a late talker.

By age 3, our new reality has set in. Most of the photos of Noé are taken during his many therapies.

There is Noé with his morning ABA therapist matching letters!

There is Noé with his afternoon ABA therapist imitating with playdough!

There we are on the subway, headed to Occupational Therapy!

And nothing about our lives has been normal since. Look right here, the photos tell it all.