Context: We were walking up to the school playground late this afternoon and I had just grabbed Noe as he stepped out into the street. Noe is usually pretty cautious and I usually don't have to worry about him, but he loves to stomp the leaves on the ground and loses all sense of danger in the fall when the leaves are down.

Asher: Why did you grab Noe?
Me: Because I didn't want him to get hit by a car.
Asher: What will happen to him if a car hits him, he'll get smooshed?
Me: Yep. We don't want that to happen.
Asher: Yeah, I'd be really really sad to lose my brother. What will happen if Noe gets smooshed?
Me: We'll all be very sad. I will make sure that doesn't happen.
Asher: But....what if it does happen? Oh...I know, I know. You can get a new baby brother at the store the next day.
Me: Well.....
Asher: Yeah, you can get me a new brother. I'll miss Noe, but I'll have a new brother. Mom?
Me: Yes, Asher
Asher: When you go to the store to get a new brother, just make sure you get one that talks this time, ok?

Last week, my next-door neighbor's dog bit a chunk out of my leg. I was supposed to take care of him for the weekend, and despite my neighbor's insistence that he would not mind me coming into his house, he seemed to have a problem with it after all. One week and a tetanus shot later, Finn the Dog survived the weekend with the help of another neighbor, my leg is healing nicely, and my next-door neighbor only avoids me 99% of the time. All is well.

We have been planning to get a dog for awhile, but the timing has never been right. First, we were living in NYC, and then a rental home. Now we are in our own home, but Asher has eczyma and we were advised by our pediatrician to put off pet ownership for a couple more years. We had two very fly-by-the-seat-of-your-pants unplanned and unprepared pregnancies, but we have planned out the timing of our first dog for several years, complete with Internet research, physicians advice, and colorful Excel spreadsheets.

Growing up, my four sibs and I always had an interesting array of pets around the house, mostly named after Portland Trail Blazers and characters from . But we never had a dog. Maybe it was after Clyde [Drexler] the Bunny met an untimely death when his water bottle was knocked over in the middle of our July vacation, my parents decided that a dog probably wasn't safe in our house. Puddles the Turtle could always hide away in his shell when the balls came abouncin' and fists came aflyin'. Bart and Maggie the Birds had a cage between themselves and the Action. A dog in our house wouldn't stand a chance. And despite our constant begging, my parents never gave in to us.

So, instead, we adopted the next door neighbor's dog. Sham was a friendly, active Golden Retriever who quickly grew to love us (at least we would like to think so) as much as we loved him. Our poor neighbors, the W's. The badgering we put them through....."Can Sham play?" "Can I take Sham for a walk?" "Can I feed Sham my Twinkie?" I would have built a REALLY big fence between our houses. Their love and patience with all five of us from toddlerhood through teenagedom still amazes me. They made Sham feel like he was our dog, too.

In fact, I think I told people that on occasion. "Do you have a dog?" "Well, yeah...uh...sort-of. He doesn't live with us all of the time, he lives next-door a lot, but I play with him and take him on walks and everything. Yeah, I totally have a dog."

And then, we had to say goodbye to Sham. Sham was a big, active dog, and our neck of Portland was becoming more citified by the day. Our neighbors decided that he needed more room to romp and found a nice farm family who would take him in. On the day he left, all five of us waved goodbye through our front window, noses scrunched against the tear-stained pane of glass.

Thinking back, maybe our neighbors were just tired of taking care of "our" dog for us. Or maybe Sham ASKED to leave because he didn't like me? Perhaps I'm a friend of dogs, but they're no friend of mine. 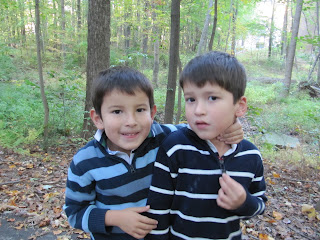 We've done a lot of hiking and Sunday afternoon walks on the trails. Most involve some sort of bribe for the boys to participate.....ice cream, bike riding.....I think I promised a trip to the playground this day. The foliage, while not as spectacular as some years, is still beautiful. 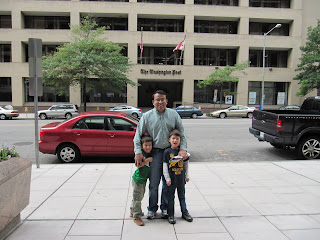 We spent some time in the District over Columbus Day weekend, mostly so I could shoot photos for a little side project (my brother and I are collaborating on a series of iPhone apps). Here are my little journalists-in-training dropping Papi off at work after a day playing tourist. 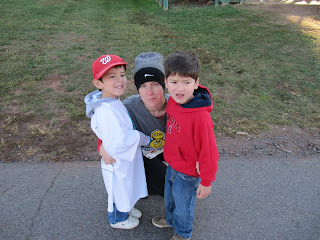 I ran a 5K to support the Virginia Walk for Autism. The entire race, I looked forward to see my little cheering squad at the end of the race, but nope....they were busy playing in the moon bounces when I crossed the finish line. 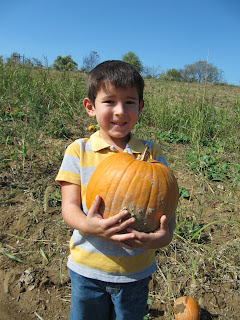 We trekked to Loudon County to find pumpkins at a real farm. The ones for sale at Trader Joes were much cooler than anything we found at the pumpkin patch. Oh well, it was a fun trip!

This Saturday I will be participating in a 5K race for the Virginia Walk for Autism. The Walk, and associated fundraisers, benefits autism families in the Northern Virginia area. Families apply for mini-grants that can be used towards autism-related expenses. One of the great travesties of our nation's health care system is that it does not require insurance companies to pay for autism-related treatments and therapies, even if they are medically necessary and even if the therapies have been proven effective using scientific method. We are blessed to have therapies available for Noe. Even though he is far from cured of his autism, we have seen his progress and know he would be a different child without them. Even so, we spend more each month on his therapies than we do on our home mortgage! Many families just don't have the resources to treat their child without outside organizations to help such as this one.

I was thinking it would be cool to raise 5k for the 5k, but that seemed a little ambitious in a week's time. If you can, please consider donating to Team Noe. Thank you!

How can you say no to that cute little face?

Five Reasons Why Halloween Is the Worst Thing About Fall 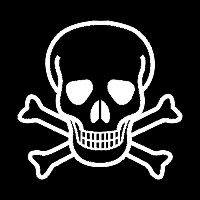 Yeah, I'm a Halloween hater. I have many friends who love it and I admire their passion and creativity (check out this friend's Zombie Barbie collection....THAT I do love). But not me, not ever. And especially now that I have kids.

Why do I hate Halloween? Let me count the ways....

1. Costume shops. They smell like a mix of latex, armpit sweat and really, really cheap stuff.

2. Trick-or-treating with Noe. I love Noe to death, I really do. But autism and Halloween are a bad mix. Trick-or-treating with Noe is at best comical, at worst nightmarish. When we knock on a door, Noe expects to go inside when the door is answered. I spend most of the exchange frantically pulling him away from the entrance and praying that the candy giver doesn't require Noe to say "Trick or Treat." Not that I'm embarrassed of his autism, but who would want to explain THAT to perfect strangers over and over throughout the night? Often, Noe will receive his candy, and then hand it right back to the candy giver. Then I get the "Teach your kid some manners" look.

We have a group of nice neighbors who at least sort-of get Noe's differences, and I have no problem ringing their doorbells. However, Asher could spend hours casing neighborhoods for candy and the night never ends well for anyone (see #5 for additional insight).

3. Dressing up Noe for Halloween. I have yet to find a costume that Noe will wear. We've tried every innocuous costume available....Bear, Baseball player, Soccer player, Train Conductor, Dog. Even the Mexican Jumping Bean Costume, when he just had to wear a brown paper sack over his clothes, didn't survive the lap around the neighborhood. And to be honest, I never loved getting dressed up as a kid either. The candy was adequate motivation to make a good effort, but I never recall being really excited about my costume. Plus, growing up in Portland, you wear a raincoat over your costume, so no one really sees your costume anyways.

3. Candy. It does nothing good for anyone. The boys go crazy. Ed and I get fatter. And this year I am going into the holiday dangerously close to being in good shape and a happy size, yet I just can't resist chocolate. Especially chocolate that starts and ends in the letter M.

4. Horror movies. I've never enjoyed them. Life already scares the hell out of me. Why would I want to get scared on purpose, for enjoyment?

5. Single-parent Halloween celebrations. Ed has worked EVERY Halloween since we've been parents. I'm not exactly sure how that math worked out, because he does get nights off. Regardless, it sucks. Trying to be a good neighbor and provider of neighborhood candy at my door, plus dealing with Noe's Halloween trauma, plus making sure Asher has a fun evening and reaches his candy quota, equals