We are back at it! The start of the new school year has gone well.  I'm loving both Noe and Asher's teachers and their curriculums.  Living in Northern Virginia has its shortcomings, but the top-notch schools make up for a lot.

Portland Trip: All the Rest

We had an epic trip to Portland.  Lots of new adventures mixed in with family and friend time. But it's time to let go and move on.  Here are some of my photo favorites.... 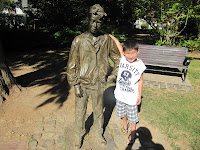 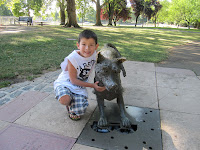 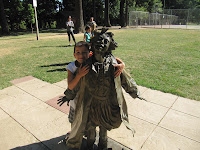 Asher met his favorite storybook friends at Grant Park in NE Portland.  Although we read aloud some of Beverly Cleary's books in preschool, this summer he devoured the series starring Ramona, Beezus, Henry Huggins and Ribsy on his own.  I love the Portland references dotted throughout Cleary's books and the nostalgia her stories evoke.  Asher thinks Ramona is hilarious (especially in her younger, more precocious years) and he loves reading Henry's adventures.

Asher: Mom, can I have a paper route like Henry when I turn 11 years old?  I can deliver the papers that Papi writes on my bike to all the neighbors.

Me:  I'm sorry, Honey, but newspapers might not even exist by the time you turn 11 years old.


We spent one of our first days of the trip at the Portland Children's Museum. For River's birthday present, we let him choose an activity and he chose PCM over bowling AND Chuck E Cheese (thank goodness!)

Noe (of course) loved the water room most of all but also enjoyed other activities.  All of the kids really enjoyed the clay room where they got to shape globs of clay into treasures.

Afterwards we headed to Burgerville for burgers and berry shakes (nothing says summer-in-Portland like a marionberry shake!) 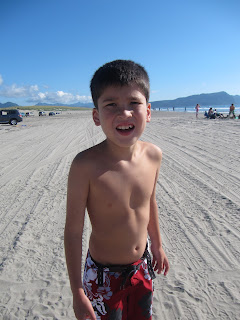 The past summer was pretty great with Noe.  He has been smiling more than ever.  I love his smile, and even when he isn't smiling, he possesses a new level of comfort around us.  He wants to be near us.  He doesn't hide himself in far away rooms to stim anymore.  At least not nearly as often as he used to.  After we have successfully communicated with each other and I start fixing the snack he has asked for, or I open a tight lid to a toy he wants, he smiles really big and does a little happy dance where he giggles, claps and jumps up and down.  Probably not age appropriate, but very cute.   I'm glad that as hard as communication is for him, he can find pleasure in it.

Noe is my newest running partner.  He is a great partner.  He likes to run in the morning, but not too early, like me.  He won't get pregnant on me and quit.  I don't have to hear about his financial or in-law or relationship problems.  He doesn't accidentally slip and tell me that I would look "really amazing" if I just "lost those last 10 lbs."  Instead, we run in perfect silence.  Sometimes we hold hands.  We never pass up a sprinkler or mud puddle in our path.

I love how his mind works.  When I ask Noe to put his pants on after a shower, he will put on his underwear or pajama bottoms, but never both.  I don't think it makes any sense to him why we wear two pant layers.  When the sun got in our eyes while walking the other day, he just turned around and walked backwards.  Problem solved.

As long as he is well-fed and well-rested, Noe is tons of fun.  We play board games like Perfection and Jenga.  He is always first out the door to hike or bike or go to the pool.    He is the only one who will willingly keep me company on a trip to the grocery store.  Our day-long trip to the Portland Zoo last week was especially memorable.  He patiently and attentively looked at every zoo exhibit.  He willingly shared a soda and pretzel with his little brother.  When it was time to leave the geyser that sprayed up water (his favorite) he did not even grunt in disapproval.  Four years ago I would have been chasing him through Washington Park the entire day. Two years ago (or even last year) he would have tantrumed at the water geyser until I threw him over my shoulder and carried him away.  We've come a long way, baby!

I love his new-found sense of humor.  When we went swimming over vacation, I kept throwing Noe into the deep end of water, much to his delight.  After deciding to take a break from our little game, I felt little hands pushing me from behind into the pool water.  Noe had pushed me into the pool!  It was epic!

As my friend Ami wisely observed.... Noe just does what everyone else WANTS to do.  Like sitting down at a strange family's picnic table at the park until they hesitantly but graciously served him a plate of rice and chicken (mommy fail...I thought he was at the splash pad with the other kids), or ripping off his swim trunks to run into the ocean waves, or eating around the layers of cake to get to all the frosting.

When Noe was diagnosed with autism, I can't honestly say this is how I wanted things to turn out seven years later.  I held grand delusions that once we had proper therapies in place, Noe would be able to shed much or all of his autism.  It would have been crushing for me to know back then that as a fourth grader, Noe would still have very limited verbal skills and spend most of his school day in a self-contained autism classroom.

But I don't feel crushed.  He continues to learn and progress with the help of truly talented autism therapy professionals and a caring school community.  They echo what Noe's father and I have always believed.... Noe has a bright future ahead of him.

And I'm pretty thrilled to be along for the ride.