The Family That Reads Together.... 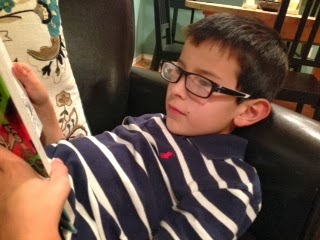 Asher is like his "papi" in many ways, but none is quite as striking to me as their shared reading habits.

Both are voracious readers who are always reading several books simultaneously (which drives me crazy, btw ....I am a one book at a time girl).

Asher is an incredibly fast reader (also like his dad).  Meaning, we bring home a stack of chapter books from the library and by the next day he has read every last one.  I am fairly confident that he is faster than I am now.  It is frustrating to buy him books knowing how fast they will be consumed.  I calculated the per hour rate of enjoyment of his reading habit once and decided we might as well be at Disneyland.  Thank goodness for the library hold system.

Also like his dad, it is difficult to talk him into trying new genres and authors.  Sometimes I read Ash a chapter out loud of a book I want him try.  This occasionally piques his interest.  This strategy doesn't won't work with Ed, however.  He usually glances up from his book long enough to say, "Shut up, woman, I'm trying to read!"(Not really, but that is probably what he's thinking).

Some of Asher's favorites right now:


Halloween never changes much at Casa Guzman, even when we move cross-country.  Noe and I hate it.  Asher loves it.  Ed conveniently has to work.  We all eat too much candy and feel horrible the next morning.  Ahh...tradition.

It didn't take long for Seattle to pull its first Halloween trick on us.

We started our festivities late because Noe had a speech therapy session at University of Washington, which requires us to catch a bus home at the height of rush hour.  After several attempts, we were on a bus and on our way along the now familiar path through U District, around the lake, and back to our street.  When it was time to get off the bus, I grabbed Asher's hand and exited through the back.  I had meant to grab Noe's hand.  Only when I looked back to make sure Asher was following us did I realize that Noe was still sitting quietly on the bus... and the bus was pulling away.  I sprinted up to the front of the bus and caught the driver's attention just before he crossed a major city artery. I skittishly hopped on board and retrieved Noe in front of a full audience of students, office workers, and others who may or may not have been in costume.

Back home, we fueled up and dressed our parts.  Asher was a ghost mummy (Don't ask. I don't know).  Noe was a Black-Eyed P.  The perfect costume for Noe is the one where he doesn't realize he is in costume.  Nevertheless, his black eye was smeared before we even left the house.

Asher wanted to head to the neighborhood north of us (condos and townhouses, lots of homeless people living in their vans on the street) to trick-or-treat.  I suggested walking south, near the boys' school, where there were houses with families and well-lit streets.  "The houses are big so they give out good candy there," I told him.  I didn't really care as much about the candy as I did about not getting axed to death on Halloween night.

Sure enough, the first door they approached, a nice man greeted the boys with multiple full-size candy bars.  Asher ran back with a huge smile, yelling, "Mom, you were right...this is a RICH neighborhood!"  All within earshot of the man still standing at his doorway as well as several families circling the neighborhood.

Can we please go home now?

Not yet.  First, Noe will need to use the bathroom twice. First, behind the school bushes (don't mind us cops)  and then at Ben and Jerry's. Entering Ben & Jerry's will cause a meltdown after I insist we are NOT getting ice cream on Halloween night.  Then I will have to run through a stranger's house to retrieve him at one of our trick-or-treat stops (it was cute at three years old, no so much at ten).  And Asher will need to carefully admire each home's Halloween decor and have a full-on conversation with the adult at each door.  What exactly is wrong with running from house to house, kid?  Two and a half hours later we will finally make it back to our house.... pillowcases full, feet tired, and my fuse really, really low.

Listen carefully to your mama, my two little Pollitos ...

The candy tax will be very high this year.  Think if-Northern-European-kids-tricked-and-treated levels of candy tax levied to central headquarters (that would be me and Papi).  RECORD levels.....