We are not TV snobs around here. OK, maybe except for the boys. They have never really gotten into TV.... much to my chagrin when I just need them to be silent and still for a few minutes.

But Ed and I, we are TV people. I don't have the attention span to watch an entire movie and I like the anticipation of looking forward to a favorite show. And with Ed working through most evenings, our opportunities to go out on the town are limited. So when the boys are in bed and I am too tired to accomplish anything else for the day, I grab the remote. The DVR was the single best invention of the last 20 years, in my opinion. Ok, maybe just behind the Internet.

This doesn't mean we watch whatever is on. There is a lot of trash covering those hidden gems.

Here is our Fall TV line-up:

Mad Men. This may be my favorite show of all time. This season, so far, has been spectacular. The show is layered and nuanced and beautiful. The characters and dialogue are outstanding. I never "got" the whole Don Draper thing until a recent episode when he was shown outside the NY Athletic Club in a suit and aviator sunglasses to the song "Satisfaction" and I suddenly felt the need for a cold shower. Another thing I never "got" completely was why I was supposed to be so grateful for the women's movement. After watching the women of the show working their way through the 1960's, I finally get it. I get it. I get it. I get it.

Friday Night Lights. We won't see the season on regular TV until the Spring, but we're looking forward to the final season. The Taylors have great chemistry. The stories of the players are compelling. I'm so glad this show lived to decide its own fate.

Glee. The plot lines are stupid and exaggerated but the music more than compensates. And what a racket. I-tunes releases, concerts, merchandise.

The Middle. I randomly discovered this show last season and I think it is adorably funny. It is your average family TV sitcom with a little more smarts and quirk. Little boy Brick, bless his heart!

Modern Family. Ok, I still haven't actually watched this show. But everyone tells me I have to.

The Good Wife. Mr. Big and the pretty nurse from ER are married and trying to weather a political scandal together. Love this show!

. Even the awesome wedding show last season wasn't enough to keep it off our hit list.
Desperate Housewives. Is there really anyone still alive on Wisteria Lane?
Brothers and Sisters. Worst soap opera on TV. What a waste of a talented cast. 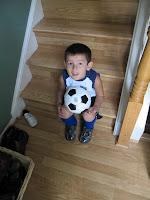 Yep, we're one of THOSE parents now.

And he seems to like hanging out with his teammates. It helps when one of them is your best friend from preschool. 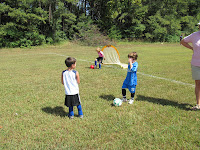 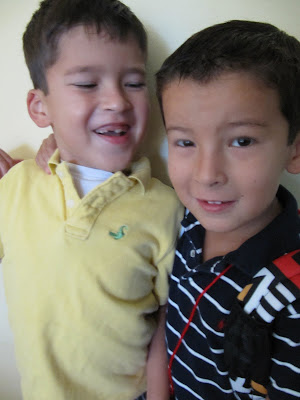 Things are always interesting when Noe and Asher start a new school year, and this year has not disappointed. Some highlights so far:

*Asher walked into his class on the first day of school and loudly announced, "I'm Here...."

*Noe lost ALL of his school supplies somewhere between the bus and his classroom on the first day of school. I had to have a school supply shopping REDO and it was even LESS fun the second time around.

*We had some slight fog one morning and Asher insisted on taking a flashlight for the walk to school. And not the little mini flashlight. He needed the mega we-only-get-this-baby-out-for-hurricanes flashlight.

*Our typical morning plan involves Noe and I walking Asher to his school and hurrying back in time for Noe to catch his bus. On Day 6, I was pulling Noe along towards his bus stop because we were running a little late and he face planted the ground. Skinned knees, ankles, hands ..... skinned everything. I tried to clean him up, but when Noe saw his bus, he wanted nothing to do with me. I'm sure his teacher wondered why the heck I sent him to school covered in blood.

*Asher is pretty closed lipped about his kindergarten experience thus far, which surprises me because he would tell me every detail of his preschool day. He says he likes it, but the day is "too long." I totally agree. What few details I get out of him, need translation. He likes eating at the "lunchroom basement" (cafeteria) and doing "field time" (recess) and yesterday they did "laughing arts" (language arts - he must have been reading a schedule).

*Yesterday Asher did tell me that some lady "NOT Mrs. Washington!" (his teacher) took him out of class to talk and practice reading. I think he was getting tested for ESOL. We received a letter from the school informing us that we had been racially profiled and Asher would be tested. A part of me wishes that his Spanish was good enough for this to even be an issue!

*I received a colorful and detailed daily schedule from Noe's first-year teacher. There is a block of time after lunch each day allotted to yoga. Good luck with that, First Year Teach!

*Both of my boys have issues with public restrooms and I should have anticipated it would be a problem at school. Noe will only go at the very last minute (thank goodness he has a bathroom in his classroom) and Asher hasn't gone at all! He goes before school and holds it until he gets home. Kid has an XL size bladder. I asked Asher what he was going to do if he had to go during the school day and he told me he planned to run home really really fast. Some days I half-expect to see Asher's little face at the door, even though I emphatically explained that running home was NOT an option. My sister suggested I send a florescent yellow vest for him to wear so at least he'd be safe crossing the streets!

Best story of all:

Mondays are half days of school. For Noe, this means he has a different bus driver and route on Mondays compared to the other days. On the first Monday of the school year, I got a call on my cell phone from the Transportation Office saying that the bus was waiting at the stop with Noe while I was finishing up a run. Panicked, I sprinted the last two blocks. I was completely puzzled because the call had come only 5 minutes after Noe's school day ended and it takes at least 10 minutes for me to drive him to his school (and a bus would take even longer). When I got to his stop, there was no bus and no Noe. I called back, trying to locate Noe. After being transferred and put on hold for more than a half-an-hour, I finally had someone's word that they would contact the bus driver and call me back. An hour later, after receiving no call, Noe's bus pulled up. I rushed out to discover that the bus was late, and it had never arrived the first time. I had received the call by mistake. The transportation assistant then pointed to Noe and asked me, "Are you Paul's mother?" I replied, "This is Noe, and yes, I am his mother." She then looks at the bus driver and says, "There is a mistake. We can't give her this child. His name is Paul." Whaa....? I then boarded the bus and showed her the label on Noe's backpack. She looked confused and said, "Well, his folder says his name is Paul Frank." I had purchased Noe a school folder similar in design to this one.

I still don't know whether to laugh at her mistake or cry because my son is in her care.