Noe and Asher Do Bull Run 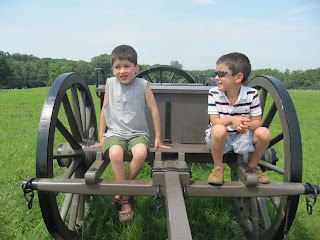 I would hardly describe myself as a history buff, but it is hard not to be fascinated by the Civil War. I really enjoyed reading this article from last Sunday's about the Battle of Bull Run. Among the shocking things I learned: People showed up to view the battle scene "with parasols and opera glasses." There were even VENDORS selling food, as though they were attending a baseball game. Soldiers arrived in all different styles and colors of uniforms, which made it impossible to tell who was fighting for which side. It sounds like the battle resembled a comedy of errors, where unfortunately, many lives were lost.

Tomorrow marks the 150th anniversary of the battle, so I took my own two little war mongers to see the battlefield in Manassas, which is only a 25 minute drive from our home. It was hot and sticky, but we spent some time looking around the battlefield, catching butterflies, and playing on the cannons. Parts of the battle took place on a widow's farm. Poor Mrs. Brawner must have had the surprise of her life!