'It happened how it was supposed to happen' 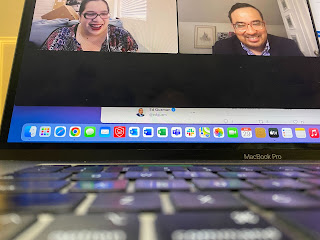 I’ve always considered myself fortunate in life. I’ve often said that I’ve had experiences that are beyond this barrio kid’s dreams. Whether it was being the first in my family to graduate college, or getting to work and live in the places I’ve worked and lived, it’s been a good life. And all along the way, having friends, loved ones and mentors to share the moments with have made it that much more gratifying.

Lately, I’ve also found myself saying: It happened how it was supposed to happen. And as I sit here, on the eve of starting my next professional chapter in what can safely be called a dream job (deputy sports editor, Los Angeles Times), I find myself shocked at just how much I’ve packed into the “it happened” part of the phrase, particularly in the last five years.

But when you’ve had said friends (like the one in the picture above; more on her later) in your corner during that whole time, it starts to make more sense.

Five years ago, nearly to the day (Nov. 9, 2017), I left the Seattle Times. We all said the right things publicly on that last day, but as I quietly walked out of the newsroom via a back stairwell, the relief was palpable. It had become an incredibly toxic situation for me there, and I had been passed over for a couple of promotions in the previous 15 months. I would find out much later just how futile my efforts at moving up in that workplace were, further confirming my instinct to pivot out.

In short, I needed to get out of there.

As self-evident as it was to leave, it was not an easy decision. Journalism was the only thing I had ever wanted to do and it was something I had been doing for 18 years up to that point. More than half that time was spent at the New York Times and Washington Post.

At the same time, it was as good a time as any to transition. My two sons were about to turn 13 and 15, a critical time for me to be more present as a father. The next job (in the nonprofit sector) not only provided a more traditional work schedule, it also facilitated an eventual move to Portland, something we had always aspired to but could never quite pull off. And after moving constantly for my career, it only felt fair and right to figure out a move that would land us back in Jen’s hometown.

Once we relocated from Seattle to Portland in the summer of 2018, I found comfort in the familiar, and the new. I had lived here previously, when I worked for the Oregonian from 1999-2002, and I met and married Jen in Portland. There was plenty to savor, even 16-plus years after we had moved away. But there was also the new as I leaned into my propensity to network (a skill I had vastly improved on; I could write thousands of words about relationship building alone). It created a new circle of friends, some of whom I lean on heavily to this day.

It was a fruitful time for me, and it led to the next job: as a bilingual communications specialist with the City of Hillsboro. My start date was March 16, 2020. I drove to the Hillsboro Civic Center, decorated my cubicle, met my new co-workers, did the HR orientation session… and by that afternoon, the city manager sent an email memo announcing that we would all be working from home until further notice due to the COVID-19 pandemic.

The most succinct way that I could describe my time at the City of Hillsboro is that sometimes, the moment finds you. I knew going in that because of Hillsboro’s demographics (roughly 25 percent Latino/Hispanic and 44 percent BIPOC), my bilingual skills would be useful. But I never would’ve guessed that they’d be leveraged this heavily as the communications team worked tirelessly to disseminate information to the public related to a global pandemic.

The old journalism skills also proved useful as my colleagues and I worked collaboratively as we reacted quickly to a fluid situation, ever mindful about meeting all of our community members where they were. During such an uncertain time, I took some solace in being able to do meaningful and impactful work.

As I worked in the nonprofit and government sectors, journalism was never too far away. A very wise acquaintance told me when I left the Seattle Times that I would have more “emotional bandwidth” for the things that mattered most in my life. And in the journalism space, it was definitely the friendships I had forged. The industry is volatile and challenging, but the relationships can be forever. Something about the nature of the work that allows for moments in which you can bond, and you end up remembering those who showed up for you. And thus, I was happy to return the favor for my friends, offering any advice, perspective or volunteered time when asked.

Even so, by the late spring/early summer of 2021, I wondered if that chapter in my life was done and if I needed to make my peace with that. To be sure, there wasn’t any great feeling of anguish about it. I felt like I was thriving in Portland in many respects (a strange thing to say in the middle of a pandemic, but it was true), so I wasn’t actively seeking out any way back into journalism. I was nearly four years and two jobs removed from my last newsroom.

It was happening how it was supposed to be happening. Or so I thought.

Sometime after Labor Day 2021, one of those trusty journalism friends connected me to the person who would become my boss in my first job back in the biz. A few weeks and interviews later, I had a job offer from ESPN. Terms were agreeable – I could even do the job from Portland – and before I could catch my breath, I was back as the sports editor of Andscape, ESPN’s website that explored the intersection of race, culture and sports.

There was an inkling of self-doubt on the eve of starting the job at ESPN. What if my journalistic instincts felt rusty?

By the end of the first week, I knew I was exactly where I was supposed to be.

The next several months were exhilarating and satisfying. We went through a rebrand (Andscape was formerly known as The Undefeated), I was the editorial lead on interesting projects, and I was bringing fresh voices into the fold. Nearly six years after the lowest moment of my professional life (losing out on the sports editor job in Seattle), I felt vindicated and fulfilled.

And yet, one more twist remained.

The person in the photo with me at the top of the post is Iliana Limon Romero, sports editor of the Los Angeles Times. She is an incredible journalist, and more important, an incredible person – truly one of my personal heroes. We’ve known each other for several years, a friendship borne out of many long conversations about how to navigate this industry as Latinos. The respect and admiration is deep, and mutual.

A few months after I left the Seattle Times, she was promoted to sports editor in Orlando, one of the few Latino sports editors in the U.S. at the time. It felt like such a triumphant day, and I made sure to tell her that. As I’ve often told her: this is what progress looks like.

Iliana was one of those journalism friends whom I stayed connected with, and I was always happy to listen, talk, and listen some more. I still remember the first time she mentioned the idea of working at the Los Angeles Times and what that could look like for her. She would eventually join the L.A. Times staff as the deputy sports editor in early 2021, another triumphant day.

Not surprisingly, she hit the ground running and was promoted to sports editor about six months ago. By the summertime, we were having conversations about her old job and what it would take for me to seriously consider such a role.

Many weeks and many conversations and interviews later, here we are on the verge of being co-workers at long last. It worked out, all the way around. My sons are about to turn 18 and 20, with one of them through high school and the other about to graduate in the spring with plans to go to college after that. Even with all the challenges our oldest son has endured in recent years – in addition to being on the autism spectrum, he started having epileptic seizures in May 2020 – he seems to be in a generally good spot in life and is well supported by all of us in our family.

I go into this next professional chapter with excitement, enthusiasm and profound gratitude.

Excitement over the chance to work for the hometown newspaper, the one I first read when I was in elementary school when my parents got me a subscription and sparked a lifelong passion for sports journalism.

Enthusiasm about working with someone I greatly respect in Iliana. She is a wonderful leader who advocates for her charges like few I’ve ever seen. When you get the opportunity to lead with a boss who shares your vision and your values, you do everything you can to make it happen.

And profound gratitude, for family that kept me grounded and focused as I considered this latest change. And to friends, who were there with me through this whole time and never lost faith that I still had something meaningful to offer an industry I had exited.

It happened how it was supposed to happen.