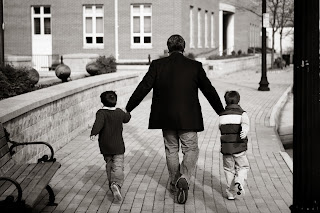 Conversation between me and Asher earlier this week.  The boys and I had just returned from our Father's Day shopping trip:

Me:  Where should we put Papi's Father's Day present where he won't find it?

[Ed has been traveling a lot this month....that is the only reason I can think of as to why this *might* be a good hiding place!]


And this morning.... Asher shows me the Father's Day card he created for Ed and the nice note he included.

Asher:  (Completely serious) Well, when it's Mother's Day, I am going to just cross out Papi's name and write Mom and then give it to you.  [Apparently Asher isn't very sentimental either]


Asher started swim team at a neighborhood pool this summer.  It is a rite of passage for kids growing up in our town to participate in swim team.  It also helps him go to bed early and sleep hard.  I hope to get Noe participating as well in a couple more years (see above about sleeping).  We have some issues with swimming in a straight line and not getting distracted by other things in the pool to work out first.

I was a little shocked Asher made the team.  During tryouts he belly flopped off the starting block and he still doesn't know his breast stroke from his butterfly.  In fact, usually he does a strange hybrid of the two strokes.  The other day at practice his team was practicing relay races.  Somehow Asher missed his leg and was still calling out asking if it was his turn to go while the rest of his team was huddled on the other side of the pool, wrapping up practice for the evening.

His first swim meet is Saturday.  Last week I ordered his racing suit online.  Yesterday it arrived in the mail. I audibly gasped when I opened the box.  It *might* have fit my sister's cabbage patch doll.  I went back online and checked the sizing chart.  And then I got on the phone and begged Speedo to send me a larger suit before Friday.  I still have no idea what happened..... according to the sizing chart, that is his size!

Practice is every evening at 7PM sharp.  Most nights, the boys and I ride our bikes up to the pool via the Reston Trails.  It is a beautiful ride.  On the way back, the sun is setting, the air feels cool and quiet, and the forest comes alive with deer, fox, and fireflies.  I will miss these rides when practice begins at 8AM after school lets out.

The swim team managers graciously allow Noe to swim in an area of the pool which isn't used for swim team.  It has saved my sanity, because Noe loves to swim and taking him to a pool and not allowing him to swim would be akin to torture.  Leaving him at home is not an option, because Ed is at work. So every evening, I grab a pool chair near Noe's swimming area and relax for the 40 minute practice, knowing both boys are getting more tired by the minute (see above about sleeping).

Last night, Noe had just completed his nightly swim in his designated area when we decided to go to a nearby playground while Asher finished up practice.  As we were leaving the pool area, a team manager mom approached me.  She said the coaches and managers had found poop in the pool near the spot Noe was swimming and would I please notify someone next time he poops in the pool so it can be properly cleaned up?  I told her that I didn't know he had pooped, and I started apologizing profusely.

And then I stopped and thought about it. I remember well the last time Noe pooped in a pool.  It was at a hotel.  It was many years ago, and although he should have known better, he had been plagued with stomach issues on and off throughout that trip. I always take him to the restroom before we go into the pool and he is good about telling me when he needs to go these days.   I checked him for evidence of an accident. Nothing.  I asked him if he pooped in the pool.  "No," he shook his head firmly.

"He was the only one swimming in that area."

She had a point, but it just didn't make sense.  Plus, it could have been there before we arrived.

Just then another team mom came out looking embarrassed and said they had tested the alleged poop and it was just tree debris.

Mystery solved.  But a good reminder to me that other moms will be nice to you and tolerant of your child with special needs, but the minute someone thinks they have found a piece of crap sitting on the bottom of the pool, it is your kid they blame first.

A Plague on Both Your Houses

Note:  This post doesn't really fit Shakespeare's intended meaning of the phrase, but it sounded like a catchy title.

Ever since our week of mysterious illnesses and diagnoses, there has been some strange shist goin' down at our house.

Plague Exhibit 1.  Last Friday afternoon, while Joe the Contractor was putting down tile in our master bathroom, he discovered some black mold.  Apparently that is a very bad thing and he ordered everyone out of the house immediately.  He wouldn't let us go back in for anything, claiming he was "legally liable" if we got sick.  I drove home from work, picked up my Mexican refugees, and we wandered around Reston until late while masked men removed the mold.  To add to the fun, the DC area was having massive thunderstorms and flash flood warnings.  And was on a tornado watch.

Plague Exhibit 2.  That weekend brought more home improvement mayhem when Joe the Contractor accidentally torched a piece of insulation.  Flames immediately shot up the inside of our bathroom wall.  Fire and ambulance responded.  Neighbors gathered and gossiped.  Joe the Contractor sustained burns after he ripped through drywall trying to put out the fire.  The firemen stormed (OK...that is an exaggeration) checked the attic for smoke.  The fire had been contained.  To be safe, we changed out the batteries in all of our smoke detectors that night.

Plague Exhibit 3.  On Wednesday, the very worst plague of all fell upon us. Dunkin Donuts opened up across the street from our house.  Not down the street and through a large and spacious parking lot.  I am sayin' ACROSS the street.  So close that there are donuts being frosted and sprinkled within 3-point shooting range of my front steps.  And I like me a good cake donut!  The boys and I stopped in late Wednesday night and I was relieved to see their donut selection wasn't so great.  I don't really get East Coasters infatuation with the DD.