The mantra of our six-day road trip south started out as "We can always just drive home if we're miserable." By the second day of the trip it had changed to "Let's quit our jobs and hit the road for good!"

We had a great time on this trip. We spent three nights down at Emerald Isle (southern tip of the Outerbanks) and two nights in Charleston, SC. Here is my road trip top 10 (in no particular order):

1. Whole Shells. Growing up near the Oregon Coast, I always thought finding whole shells along the beach was a myth invented by Hollywood. But they really exist, at least in the Carolinas! It was so much fun to go shell hunting. The shorelines would literally be overflowing with intact, beautiful shells. Sometimes I would pick one up and think, this must have been bought at a store and then dropped by the North Carolina Dept of Tourism! We brought some home to keep...I wish I would have brought enough to fill my entire house with them!

2. Southern Food. We ate hush puppies and grits for the first time. Ed ate a lot of oysters and crabs and such 'cause that is his thing. We found this place in Charleston called the Glass Onion with amazing southern comfort delights. I want to drive all the way back for more cornbread and deviled eggs, please.....and mashed potatoes and collard greens.....yum!

3. Dolphins. I had no idea we would see dolphins on this trip. We first spotted a few in the water on the ferry back from Shakelford Banks. We saw more on the Charleston Waterfront. When we went to Folly Beach (near Charleston) there were three dolphins playing within a few feet of us in the water. Spectacular. We were told they hang out in the area until July when the water gets too warm. 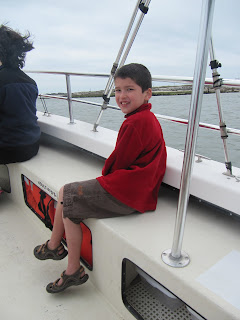 i missed getting a shot of the dolphins, but got a cute one of Noe


4. Historic Charleston. Charleston was so beautiful that I was *almost* convinced that the Civil War really was "a war of northern aggression," as they like to claim. How could this beautiful place have ended up on the wrong side of history? It reminded me a bit of Georgetown, but with palm trees. I couldn't keep my eyes off the beautiful houses and churches. There was a lot of Easter preparation going on at the churches. We walked through the old cemeteries at the Catholic churches and snuck into a beautiful stained-glass sanctuary at a Presbyterian church. I would have loved to attend Easter Services there. 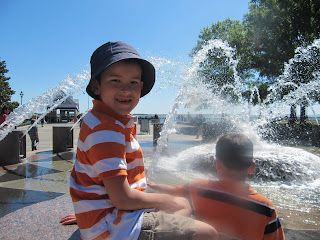 Serena, is this the water fountain where you and Barry got engaged? 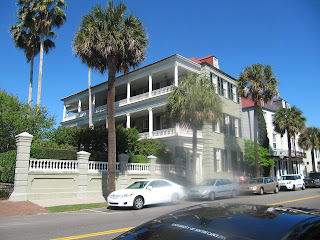 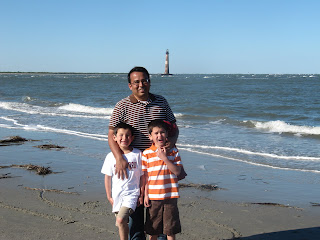 I was all pumped up about exploring lighthouses on this trip. So when we saw signs for a hiking trail that was supposed to lead to a historic lighthouse, we jumped out of the car and hiked. This is as far as we got. I decided against the mile swim. 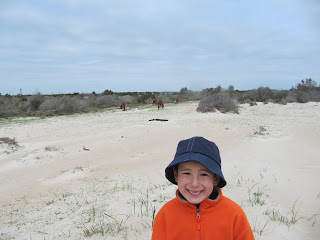 Look behind Asher and you will see the "wild" horses

One day, we took a ferry out to a small island that was home to dozens of wild horses, left by the Spaniards back in the day. I was expecting groups of them to randomly run past us as we walked the island, 'cause they're wild, right? But we actually had to hunt for them by following the horse poop. We finally found a group quietly eating grass. Ever since television and the Internet came along, I guess wild horses aren't as active as they used to be!

7. Mini Golfing. Dude. The South does their mini golfing right. At Emerald Isle, we took our very own train to the first hole. There were cascading waterfalls and no clowns or cheap windmills. The boys got into it (although Noe preferred to kick his ball into the hole if we didn't watch him). I had a great time because I was with my cute little threesome.....I could skip the golfing. And golfing also deserves a mention because it cost us $36 for 18 holes. Yes, you read that correctly. For that much, I was expecting a high-five from Tiger Woods for my holes-in-one.

8. Car Talk. Ed and I had so many great talks on this trip. Mostly when we were held hostage along long stretches of highway. Since most of our conversations take place on Facebook chat or are prefaced with the phrase...."You have exactly three minutes to talk before I have to go to X" these days, to have long stretches of conversation was pretty fabulous. We learned that we are both in our thirties now and have two children, among other things...

9. Piggly Wiggly. This is a real grocery store! I always thought it was a place that people invented to make fun of Southern folk. An' I seen it with my very own eyes!

10. Technology. Finally, a special shout out to the iPads and other new-fangled technology contraptions that helped make the long drive a pleasant experience for all.
Posted by Jen at 3:57 PM 2 comments: 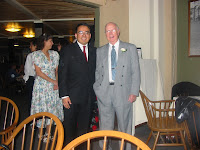 One of the hardest things about living on the East Coast the last 10 years has been being away from extended family. I know this has been particularly difficult for Jen, who still had all four grandparents when we moved to New York in 2002. Inevitably, health problems would creep up and it wouldn't be so easy to get back to say goodbye or pay our respects.

On the other hand, you cherish those times you got to see them that much more. And every once in a while, you get a memory that you will never forget.

I would put my last significant visit with Jen's paternal grandfather (Razz as everyone called him) in both of those categories.

We went to Portland last April for spring break, and by then we were well aware of Grandpa Razz's declining health. His wife had died a year earlier after a long struggle, and he had slowly gotten weaker in the ensuing months. By this point, he was living with Jen's aunt and being taken care of.

Even though I knew him for a fraction of the time Jen knew him, I still have many wonderful memories. He had been extremely generous to my parents when I got married. Even though there was an obvious language barrier, Razz was determined to show my parents a good time and have them not pay for any of it. That was him in a nutshell: His kindness transcended cultures.

But any conversation about Razz can't occur without mention of the Portland Trail Blazers. He had been a season ticket holder pretty much from the start of the franchise, when they played in the old Memorial Coliseum. He was on hand for Game 6 of the 1977 Finals, he lived through the Rip City years, he even hung in there during the Jail Blazers Era after they moved to the Rose Garden. He probably had his heart broken during Game 7 of the 2000 conference finals.

(I say "probably" because I NEVER brought it up. I knew better, especially as a Lakers fan. I remember during a particularly feisty Lakers-Blazers regular season game years ago, Jen called over to his house and he answered the phone by saying "KILL THE REFS!")

I always enjoyed looking at his old Blazers stuff and hearing about his hilarious brushes with old Blazers players (the Billy Ray Bates story is a classic).

So knowing all this, I noticed our vacation was going to coincide with the start of the NBA playoffs and lo and behold, Portland was in it. They were a long-shot to go all the way, but at least they would have a first-round series. So I figured what better way to spend time with Grandpa Razz than to go over and watch the games with him? 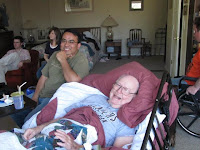 By this point, things were looking up for the Blazers.

The Blazers played Dallas that series, and they lost the first two games to the Mavericks, both of which I watched with him. I skipped Game 3, which they won, and was back at his side for Game 4, which was on a Saturday afternoon, the day before Easter. It was a gorgeous spring day in Portland, the kind where you feel you could reach out and touch Mt. Hood because it looked so pristine.

And by the third quarter, the Blazers were down by 23 points. I was starting to think I was the jinx.

They had shaved the deficit to 18 points by the start of the fourth quarter but they still looked terrible. Then, Brandon Roy happened. If you're any kind of NBA fan, you remember the game:

I couldn't believe what we were watching. Grandpa Razz was as excited as he could be, chuckling at the Blazers' good fortune. By the last two minutes, the rest of the family that was around ran in to see the finish and we were making quite a scene. And when Jason Terry's desperation three-pointer fell short, it was pandemonium. I turned to Grandpa and told him: "We got a series!" He laughed, happily.

It was all I could say before running off to the restroom and breaking down and crying.

I know it's just a game and I'm not even a Blazers fan, but that wasn't why I got so emotional. It was because I realized right then that this was probably the last time I'd ever see him (we were flying back to D.C. two days later). The fact it happened during an insane Blazers playoff game made it a happy memory. But it was certainly bittersweet.

Eventually, I composed myself and said goodbye, gave him a big hug and told him I loved him. The look on his face will resonate with me forever. He was clearly touched, even got a little choked up and then he said, "I love you, too."

Grandpa Razz passed away Friday night, nearly 12 months after that last happy afternoon together. Jen broke the news to me this morning. I'm sure she and her family will do his memory far greater justice than I ever can (see the video tribute below, for example).

But as we begin to grieve, I wanted to remember that beautiful spring day back in Portland.