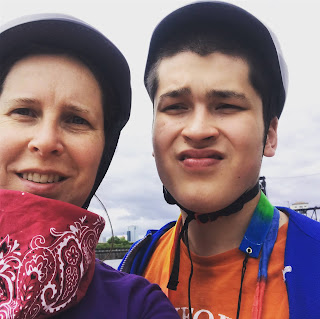 Ours was going just fine, thank you very much.

We were doing the work from home and the school from home. We were washing the hands and disinfecting the house. We were baking the banana bread and planting the garden. We were taking the evening walks. The world was falling around us, but we had this shit down.

Then, on a quiet Thursday evening in late May, Noé fell into my arms and had a tonic-clonic seizure. His face turned a haunting blue as Ed dialed 911. I really thought we were having our final moments with him, all squeezed together inside his tiny bedroom. Noé's bedroom that we had decorated in a surfer theme because of his love for the beach and with his Grant High Unified team photos pinned proudly on his bulletin board.

When you think your child is dying in your arms, the adrenalin rush of the situation expands your brain capacity like a mylar balloon. Instead of completing one thought or one task at a time, you can simultaneously process a myriad of thoughts and scenarios, all while being acutely centered in the terrifying present.

In those minutes waiting for the ambulance, I thought about some of our best memories with Noé -  riding the waves at Surfer's Healing camps, hiking around the Northwest - we always made him carry the backpack because he was so quick up the trails, watching him ride a bike for the first time around the Daniel Bagley schoolyard, sending him off to 5th grade camp, the first member of his SpEd class who had ever attended. And then, more recently, starting high school, where he looked forward to his bike ride to school and scamming extra lunches off of the lunch lady and was surrounded by teachers and peers who accepted and affirmed him.

I thought about the day I gave birth to him, seven weeks before his true due date in a cramped Manhattan hospital room. His tiny perfect body and jet black, shaggy hair and sleepy brown eyes. I shared a room with an Orthodox Jew and her steady stream of visitors and often felt envious - wishing my entire family could have been there to help welcome Noé into the world. I remembered the day of his autism diagnosis. Noé - age 2, a pudgy, curly-haired toddler who had lost his words and his smile around 18 months. I had wondered often back then if my marriage and sanity would survive this diagnosis.

I tried to imagine a new family life, just the three of us, sin Noé. Could we even have a proper funeral for him right now?  I was unsure if I'd ever recover, ever feel whole again.

I also wondered if I had picked up the living room and if the medics would notice our unwashed dinner dishes in the kitchen sink. And if the neighbors would gawk out their windows as Noé was loaded into the ambulance. My face went hot and I instantly yearned for more privacy than our neighborhood would afford. And....where was that insurance card, again?

Meanwhile, I'm pleading to Ed and the 911 operator, who was still on the line, and whoever else was listening, Hurry...please god hurry....he's not breathing. And then I'm suddenly aware of Asher sobbing in the corner of the room, so I hear myself telling him to go outside and wave down the ambulance.

By the time the ambulance arrived, the seizure had started to slow in intensity. The medics were kind and calm and capable. They put an IV into his tan, skinny arm, wrapped him up like a burrito and loaded him onto a stretcher and then into the back of the ambulance as his body quieted and he entered a postictal state.

But his heart rate continued to climb so I put on a mask and hopped into the back of the ambulance and we raced off to Randall's Children's Hospital just a couple miles away. I didn't even know a children's hospital existed in our neighborhood before tonight. That's how healthy my kids used to be.

His doctors ran some tests while Noé recovered in the ER but they didn't find anything immediately alarming. We were sent home early the next morning and told to schedule an appointment with a neurologist ASAP. Taking him home from the ER reminded me of his birth and that Manhattan hospital. Seventeen years later and, once again, we had no confidence in our abilities to care for him at home. I wasn't sure I wanted to leave the safety of the medical professionals and the medicines and the machines. I felt a little silly that I'd convinced myself he was dying and then they had sent us home less than a day later, but mostly grateful that I was so wrong.

Maybe this seizure was just a crazy one-off thing, I began to convince myself. I desperately wanted to hold on to our previous "normal" which, in the Time of Pandemic, really wasn't normal at all. I held on even tighter to this theory after his neurologist did not immediately put him on anti-seizure medication, but only prescribed a rescue medication "in case" of another seizure.

But then there was a second seizure. And then a third. Seizures seem to have permanently wormed their way into our family life.

After a very long week that started with putting Noé on a medication that might have been meth (think 17-year old boy going 40+ hours with no sleep and literally climbing the walls of the house) and ended with yet another seizure in the hospital as Noé was waking up from an MRI, we are starting to recover and find a new rhythm. A second medication has managed to control his seizures (so far) with limited side effects. We are extra careful around water. He no longer gets to climb heights and a bike helmet is non-negotiable. He has to take a giant pill two times a day and there will be regular blood tests in his future, but otherwise, so far, his life hasn't been too terribly interrupted.

I have less fear of the next seizure. We know how to keep him safe. We know that the chances of him dying from a seizure are quite low. I'm just sorry he has to endure yet one more thing. As if he hasn't had enough challenges in his seventeen years on this crazy planet.