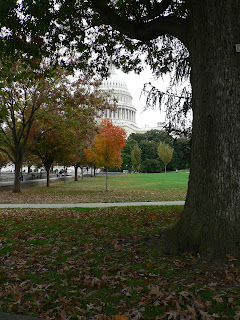 autumn at the Capitol 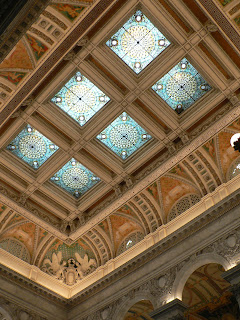 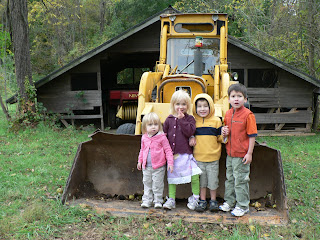 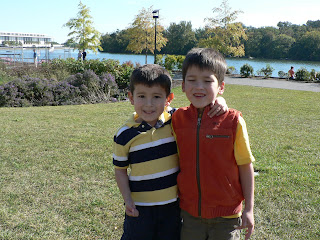 I'm sick during my most favorite time of the year. My chest feels like Mike Tyson decided to take a nap on it. I keep looking out my front window and thinking, "STOP CHANGING, LEAVES! I still need to experience your beautiful colors and feel you crackling under my feet and jump in a big pile of you, STOP IT THIS INSTANT!"

But don't worry about me....the boys are taking great care of me while Ed is at work. They've got it all covered....laundry, meals....heck Noe even drove himself to school this morning. It's all good!
Posted by Jen at 3:42 PM 7 comments:

Sunday: Spent the afternoon walking around Georgetown before dropping off Ed at work. I told Asher we were going on an "Adventure" because if I say we're going on a walk, he will bitterly complain. A boat was trying to pass through the C & O canal so we got to see the locks in action and the boys were mesmerized. Afterwards, Asher said, "that was a great adventure, mommy!" Phew.

Monday: Got up early and headed to out to Loudon County to find apples and pumpkins. My friend found a beautiful old farm for us near Purcellville. I like farms that are all food and no animals...more pleasant on the nose.

Tuesday: Woke up wondering if I was pregnant. Quit my Kaplan job over a pay dispute (I had taken a buyout in June, but was rehired this fall at what I had assumed would be my previous salary). It felt good to not allow myself to be taken advantage of....but my wallet is feeling a little emptier. Great bike ride with Ed on the Reston trails while Asher was in preschool.

Wednesday: Volunteered at Noe's school in the AM. Spent the afternoon cooking up freezer meals in the kitchen....yep....you read that right.

Thursday: PAYDAY!!! Ed and I started a new monthly cash-only budgeting system in an effort to spend less and build up our savings. Let's just say that the last week has been a little tight for the both of us. Followed balloon boy saga while I ran errands. Did a therapy session with Noe after his sports camp....best one we've had in a long time. Thinking of making him run sprints around our block before every therapy session from now on. Had friends over for apple crisp and ice cream in the evening. Made applesauce with the remaining apples from Monday's trip while Ed was out cheering for his Dodgers. Couldn't sleep....still wondering why I am having pregnancy symptoms.

Friday: Pouring rain for the second day so morning run was out. Paced anxiously around the house instead. Mid-morning I sprinted across the street to get a home pregnancy test and sprinted back. When it came back negative, I realized that it was the first time I had ever taken a pregnancy test and failed. Lots of mixed emotions, but mostly relief. Tried to get little sis pumped up for her big interview. She is doing well on her own so far with little R, very proud. In the evening, I tried a movie night with the boys. We watched.....drum roll please..... a Thomas the Train video and ate popcorn. I fell asleep. Next week is Mama's choice. Think the boys would like Pretty Woman?

Saturday: Spent the morning at a Panera studying for my SVLE exam while Noe was at his Saturday morning socialization camp. I would have had even more time to study, but I forgot my trustee GPS and had to find my way to South Riding by MEMORY. At Panera, I overheard a real estate agent meeting with a young couple. She said that the real estate market was starting to come back strong in our county. From her lips to God's ears....

Today: Asher gave his first primary talk all by himself and he did AWESOME. His face was one big smile from one giant ear to the other. I volunteered myself to do a big project for the local POAC (Parents of Autistic Children) chapter. Oh vey... time to do some restructuring of my schedule to actually pull this off. How exactly am I going to work full-time next year when I don't have enough hours in the day as it is? Just read that the balloon boy's parents staged the whole event. Sick. Sick. Sick. Interesting that the little six year old boy got physically ill at the television interviews. Kids have a much stronger sense of right and wrong than adults sometimes.....or most of the time.
Posted by Jen at 2:07 PM 4 comments: 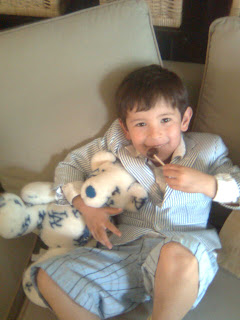 Oh Bear. You have become the fifth member of our family. You are quiet and unassuming and you just might be my favorite. I still remember the day you were born. It was Teddy Bear Day at Asher's preschool and a mad scramble ensued to find a bear... any bear.... for Asher to take. When we pulled you from the bottom of the boys' clothes hamper, it was like you emerged from the womb. We dusted off the dirt and loose socks....and life began with you in our home.

Asher has become your fierce protector. When we carelessly toss you aside, we hear about it:
"DON'T HURT BEEAAR!" When Noe uses you as a napkin, Asher gives your fake Dodger-tatooed fur a gentle sponge bath. When you were subjected to the indecencies of the x-ray machine at the airport security, Asher defended you.

Oh...the horror. An endless line of business people and government bureaucrats waiting to pass through security and board their planes....all of them running behind schedule. A frazzled mother, loading bins of carry-on items while simultaneously trying to head off the escalating tensions in front of her. And Asher, in full-terrorist mode, snatching you off of the rolling x-ray machine and tackling you to the ground, taking you hostage while pleading with the security guard not to take you away.

Welcome to the family, Bear!

Another Day at the Office 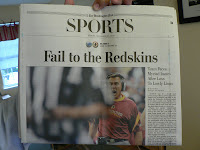 When the Redskins lost to the Detroit Lions, who had previously lost 19 games in a row, it was a sad day for DC, but a good one for Ed. He came up with the winning headline, which got him some national attention, at least until the next news cycle. His headline was played on ESPN's SportsCenter, on all of the local news channels and was plastered all over the Internet. He also got a personal shout out from a local sports radio celebrity, who called it "brilliant."

The headline is a play on words from the Redskin's fight song, Hail to the Redskins. Yeah... I totally didn't get it at first either.

On a live web chat on the Washington Post website, a Redskins fan commented, "Whoever wrote that headline should get a raise." I totally agree.
Posted by Jen at 8:18 PM 3 comments:

We took a day trip to Baltimore this past weekend. Although I yearned to explore the old neighborhoods near the harbor and stake out a charming neighborhood restaurant, we took the boys to the giant Aquarium, ate lunch at Potbelly's and walked through the Inner Harbor. 100 points to Ed and I for being such selfless parents. Grrr.....

This was our first trip to the Aquarium and it was [almost] worth the hefty price of admission. I guess I've been a little spoiled by all of the free museums in DC. Both Noe and Asher genuinely enjoyed the exhibits, and it is a rare day to find something that interests both of them, so that was a good thing. However, the Inner Harbor feels like Times Square, with water. It is still enjoyable, and I'm glad the area wasn't left for ruin....but I was still left scratching my head a bit. It has almost become that the only way we know how to revitalize an area in the US, is to use the Disney model.
Posted by Jen at 11:49 AM 2 comments: 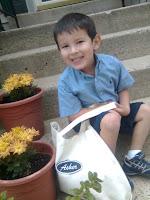 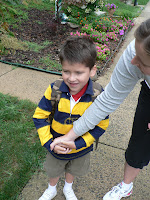 I look forward to Design Mom's back to school series each year, and decided to do my own version this year in lieu of first day of school photos.

Note: Any high-end labels the boys happen to wear are very likely from their slave-to-fashion Abuela.
Posted by Jen at 7:18 PM 1 comment: