Cherry Blossom Festival: Then and Now 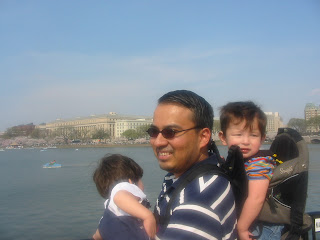 When we moved to the DC area in early spring of 2006, one of our first outings was the Cherry Blossom Festival at the Tidal Basin. The picture above says a lot about our life then..... no one is looking at the camera, no one knows exactly what is going on, lots of forced grins by Mom and Dad. 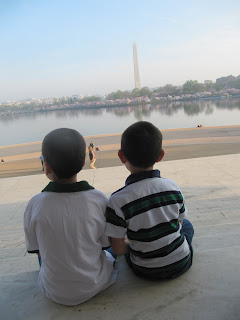 I can't deny it....life is much easier and ordered six years later.... 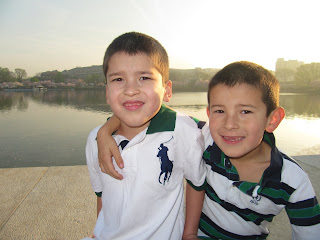 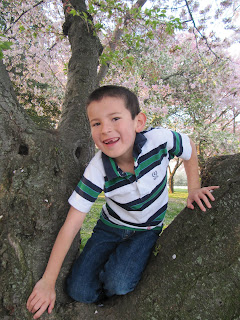 It was a magical morning. The blooms were at their peak, the weather was gorgeous, and we were there early enough in the morning to practically have the place to ourselves. We took our time through the Jefferson and FDR Memorials, enjoying the view from all angles (including the angles involving hanging from trees).

Full disclosure: I wrote this right after the Oscars last month when it was fresh on my mind. But the Oscars I refer to here happened in late March that year, so it still felt timely. Enjoy!

The Oscars telecast is usually prime time for the celebrity obsessed. Between the pomp and circumstance, what the actors are wearing and the red carpet, it's a pop culture overload.

For our household, the Oscars brings back memories of an important moment in our lives that happened 10 years ago. And it had nothing to do with movies. And it was a moment in which I was very under-dressed for any red carpet.

I was in New York City during the 2002 Oscars, getting ready for a copy editing tryout at The New York Times. My time at The Oregonian was running out and I needed to figure out what to do next. I was also a newlywed, having married Jen the previous August. Meanwhile, Jen was in the stretch run of her MBA program at the University of Oregon, commuting twice a week down to Eugene from Portland for classes.

It was a stressful, uncertain time.

And this copy editing tryout was not exactly going to be easy. They say that the New York Times copy desk has a lower acceptance rate than Harvard, and with good reason. Copy editors are a newspaper's quality control and The New York Times prides itself on being the best in all aspects of its operation.

The fact I had even earned a trip to New York was actually a promising sign. And Neil Amdur, the sports editor, was an advocate of mine from my days when I worked as a summer intern there during college. But the fact was, I still had to show I was good enough when it came time for the actual tryout.

So as I was watching the Oscars with an old college friend, watching Halle Berry and Denzel Washington win awards, watching Woody Allen's heartfelt plea to the Academy to keep filming in New York (remember, we were only six months removed from 9/11), this was weighing on my mind.

I knew it was a fork in the road moment in our lives, certainly in my career. If I got this job, we'd be embarking on an adventure all the way across the country and I'd be taking an important step professionally. If I didn't, we'd be closer to family and Jen had a job lined up after graduation, but my career would be stalled (I didn't have a Plan B).

As I was telling a colleague last week, what makes the Times' tryout so difficult isn't so much the editing of stories, but the critique session the next day. You sit in a small office with a no-nonsense editor who hectors you for even the smallest thing. You are on the defensive from the get-go, and I've met many fine editors who came away from that experience very drained. One particular memory that still stands out for me: This editor getting on this compact exercise machine as she deliberately read this very long sentence that I did not make shorter. Her point was that it was too long a sentence for someone who was somewhat distracted to try to read.

(As embarrassing as that felt in the moment, it was a lesson I still refer to today. I've substituted "person on exercise machine" for "person reading on mobile device on the subway" whenever I need to make that point.)

Of course, I survived the tryout and two weeks later I got the call.

In the years since, me and Jen have gone through a lot of adventures on the East Coast, as she eloquently pointed out in her recent post. And in spite of some obstacles in our lives, particularly with Noe, there are really no regrets to speak of. I was looking back at my journal from that time in our lives and I found this passage from the day after I received the job offer from The Times:

"I think of how we are now, young and on the cusp of the rest of our lives. We've got our whole life ahead of us, not yet burdened by the weight of what's ahead and full of hope. It's a nice feeling, and it's also so fleeting."

Sounds about right, especially the part about it being fleeting. Time certainly flies, but when you have a life partner like Jen, the nice feelings don't necessarily end.

That is the sound of our 10 year East Coast alarm going off.
This spring marks Year 10 of East Coast living (four years in NYC followed by six in the DC area). Our original five-year plan quickly turned into a ten-year plan, and the extra time here has been well spent. Ed and I have both enjoyed great working opportunities, we have found wonderful therapies and services for Noe, and it has been fun to live in places where life moves fast and things happen.
When we first arrived in NYC, the streets were still reeling from the shock of 9.11 and every street corner had its personal armed National Guardsperson. We survived the Great NYC Summer Blackout of 2003, took our second child home from the hospital by subway, ran into Mayor Bloomberg at our neighborhood park, witnessed an assault outside our apartment door. I feel like we had an authentic NYC experience.
In DC, we purchased our first home, laid low through the Great Recession, saw first-hand the Obama Inauguration and the celebration on the streets after Osama bin Laden's capture and death.

It is time to come home. I want to see big green trees and volcanic peaks again. I want "going out" to constitute putting on shorts, grabbing a bike, and finding a good food cart. I want to see my nieces and nephews grow up, and to just be a part of my own family again. I want to throw away my makeup! I want my boys to know their grandparents apart from occasional visits. I want the rain to sound the rhythm of my days once again. I don't want to miss anymore important events in the lives of my family and good friends. 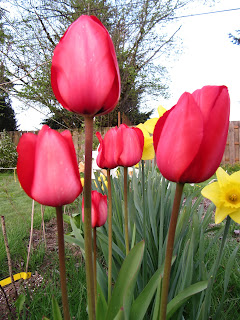 The beginning of spring always makes me feel heavy with loss. It is the anniversary of all bad things that have occurred thus far in my life. This year, it seems many of those close to me are suffering through their own losses. When the sun emerges and flowers begin to bloom, I lose sight that spring is supposed to be a renewal of sorts, a new beginning. My heart hurts, my throat closes up, and I want to hibernate in my bed until summer vacation.

Last March, Noe's speech therapist gave birth to a baby girl. In August, her beautiful baby was lost to SIDS. Over the past few months, I have silently sent hundreds of prayers her way, hoping she and her husband would find peace amidst the unimaginable. And I often wondered why a woman who had dedicated her life to improving the lives of other people's children had to endure losing her own. Wednesday morning, I took Noe to her office, just like I have twice a week since he was three years old. Before we left, she excitedly announced that she was 18 weeks pregnant with a little boy. I could not hold back my tears and soon we were hugging and SHE was comforting ME.

Now how is that for giving comfort to those who mourn? (Matthew 5:4)

It was a timely reminder to me that rebirth is the natural consequence of loss. Noe's entrance into the world, more than any other act, helped me heal from the wounds left from my father’s tragic death. Noe, and the gaggle of grandchildren who followed him, have changed the focus of our entire family from death and grief to life and joy. Every birth marks a milestone for our family, a new positive focus. Maybe this makes me crazy...or Mormon (or many these days would argue both), but I truly believe that my dad knew and loved each of his grandkids before they were sent to us. I also believe that he advised each of his grandchildren exhaustively on how to best aggravate their parents, sending us scavenging into the dark recesses of kitchen cupboards for chocolate before noon most days.

Rebirth isn't always so literal nor is it always a single event. Ed's rebirth from enduring a family pattern of alcoholism is to wake up each day and to be a stellar father, husband, and provider. My sister had the courage to end a bad marriage and go back to school. Her personal rebirth is her art and the new life she has created with her wonderful and kind second husband.

My own daily renewal takes place in the early hours of each morning, pumping out 9ish minute mediocre miles along the wooded trails of Reston. I won't be winning any race medals, but I will have won my daily dose of sanity and hope for the day. Hope that the new day will bring new language and skills for Noe. Hope that my own personal demons will remain silent. Hope that my family will end the day together and safe. Because my life thus far has taught me to take none of these things for granted.

over cheerios on a Saturday morning

Asher: Hey, Mom...
Me: Yes?
Asher: Do you remember that thing?
Me: What thing?
Asher: You know...that thing...it's like a website but you don't have to type any words...you just press a button. Sometimes there is a blue screen but you can keep pressing the button and there are all these shows you can watch.
Me: [Pause] You mean television?
Asher: Oh yeah....TELEVISION! I miss the television! Can we have it again?

Lest you think we are raising a couple of media-starved weirdos, they watch plenty of neuron-killing junk, but on our laptop or iPad or iTouch. Overpriced cable tv is officially dead at Casa Guzman.