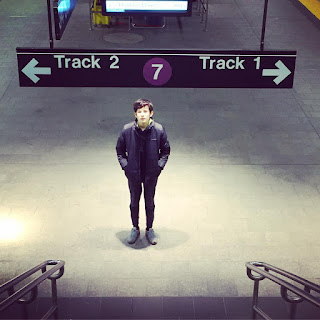 New York City is the ex-boyfriend that I can't quite leave for good. I occasionally go back for a few days of fun and excitement, and then quickly realize why it didn't work out in the first place.

Asher and I had a great trip to the city this past week. But by the final day of the trip, I was done waiting underground in stinky dark stations for trains that could never arrive on time. Tired of constantly swimming through the waves of people on the street, not to mention swimming through the actual monsoon-like rain that hit the city on the final day of our trip. Tired of people constantly selling me things on the street and putting paper advertisements in my hand. Tired of waiting in long lines for everything. Tired and ready to come back to my real husband and the relative calm that is Seattle.

But let's back up to the days before the affair went bad.

It was so fun to see the city through Asher's eyes. We moved to DC when Asher was a toddler, and we've returned a couple of times for visits, but he has very few memories of the city. Once he was finally out of bed, we were out exploring until late each day. He couldn't seem to get enough of the city. He loved its rhythm, its shiny attractions, and the freedom the subway system provided to get you anywhere you wanted to go. "If we lived here, I could go anywhere," he exclaimed with fresh realization. "Even Coney Island!"

Asher said his city favorites were the views from the Staten Island Ferry and Highline Park. I could see his future city planner brain in high gear the entire trip. We were on the 7 one morning, headed into the city, and a mariachi band stepped into our train and started playing for the commuters. Not a single person looked up except Asher, with his wide-eyed wonder. He didn't know they were supposed to be an annoyance. He dug out a dollar from his velcro Nike wallet and put it in the accordion player's open hat as they passed our seats.

We stayed in an AirBnB in Sunnyside, our first Queens neighborhood. I was lukewarm on the neighborhood when we lived there, but loved our AirBnB apartment, a renovated flat in Sunnyside Gardens, and I was in awe of all the new bike lanes that criss-crossed the neighborhood and the hipster coffee shops. There was even a dog park in the middle of the vast cement jungle otherwise known as Skillman Park!

More than the shiny attractions, the part of New York that will always have my heart is the coexistence of diverse communities. Walking back to our AirBnB from the subway station at sundown on a Friday night, I spotted a family in their home observing Shabbat over flickering candlelight and a large meal. In a park in Chinatown, we watched groups of elderly Chinese, segregated by gender, gambling on card games and playing Xiangqi on cement picnic tables. They looked just kids in a school yard, except with wrinkles. Back at Skillman Park, we saw Ecuadorians playing soccer in a light rain on a concrete playfield with their flag draped over a goal.

New York City is like a patchwork quilt with fat fabric quarters from each part of the world that, arranged together, make a beautiful finished blanket. The blanket might be frayed at the edges and you will find a lot of flaws in the construction, but the imperfections create a uniquely beautiful work.