The Culture of School: NoVA versus Seattle

We seem to hit the jackpot with public schools wherever we live.  We loved our schools in NoVA(Northern Virginia - Washington DC area) in many ways.  I'm really in love with the schools here in Seattle.  I had no idea how different public school would look in the Northwest urban corridor.

There is a lot more experimentation with education here in the Northwest.  For example, the boys attend a half-Montessori half-traditional (or Contemporary) school.  This is a neighborhood school, not a charter or magnet school.  All classrooms are mixed-aged except for the kindergarten classes.  There are quite a few K-8 schools and other non-traditional schools in our area as well.

Because we registered over the summer, both boys were placed in Contemporary classrooms, although we can probably opt them into Montessori next year.  Noe had previously spent his school career in a self-contained classroom with limited inclusion (although his previous NoVA school had fantastic teachers and resources).  This year they automatically placed him in a gen ed classroom (with support) and he will stay there about half the school day.  I am simultaneously thrilled and terrified. 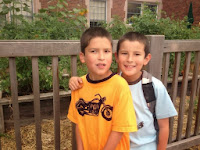 Below are some more differences:

- Less emphasis on testing.  Asher's teacher at Curriculum Night: "I spend some time in the spring teaching the kids how to take the state standardize test.  Otherwise, I don't teach to the test."  It appears that teachers here have more freedom from state standards, or at least more freedom to interpret and teach standards the way they see fit.  NoVA classrooms were much more enslaved to meeting specific standards.   This doesn't mean our NoVA teachers all favored this approach, but there wasn't much escape from it.


- Keeping up with the Joneses.  Social pressures remain, but differ.  In NoVA, it was all about academic excellence and whether your child had achieved AA (Advanced Academic) placement.  I have heard nothing about an AA-type program here, although it surely must exist. Keeping up with the Seattle Jones includes packing your child an organic lunch, doing school drop off and pickup by bicycle or foot or unicycle...really... and outdoing your neighbor's recycling efforts.

-Style. A lot more tattoos. On teachers, staff, parents.  A lot less makeup for women.  One of the upper-elementary teachers, probably in her late 40s or early 50s, has a nose piercing.  I think it looks great!  Lots of Keens, Athleta workout outfits, hipster thrifts. Teachers dress much more on the casual side.  The only time I have seen Asher's teacher in pants and a shirt that buttons was on Curriculum Night.  Otherwise it's been t-shirt, shorts and hipster glasses.  Girls at the school tend to dress kind-of Hannah Andersson with a granola twist.  Most boys wear soccer shirts and jeans or shorts.  Everyone wears flannel and fleece, of course, sillies!

- Sports.   Soccer is HUGE here.  Whereas in most of America, soccer is a springboard to American football and volleyball, you don't stop playing the beautiful game in Seattle.  Ultimate frisbee....also big.  Many elementary schools carry ultimate frisbee teams.  Everyone runs.  Noe and Asher's elementary school even has a small track!  Being surrounded by so much water, crew is also a big sport.  We have been going down to the lake on sunny early fall afternoons to watch the high school crew teams practice on the water.   It has also been fun to see that Four Square and Pickle Ball school yard favorites of mine growing up in Portland are alive and well on the playgrounds of Seattle.

- Smaller budgets.  Seattle schools, unlike NoVA schools but like just about everywhere else, have seen a lot of budget cuts over the past few years. There are no computers or fancy smart boards in the classrooms.  I've noticed some creativity with staffing (i.e.) the secretary runs out before and after school for crossing guard duties.  Music and art are both heavily subsidized with volunteer support.  Actually, volunteers are everywhere.   In our NoVA schools, the PTA was mostly a fundraising mechanism for the schools.  However, here volunteers are teaching in the classroom everyday.  I've already done some math activities with Asher's class and created all of the classroom's math centers.  I was pleasantly surprised by class sizes (Asher's 2-3 class has sixteen students and Noe's sp ed class has eight students, one teacher and 2-3 IAs.)

- Diversity.  Compared to our experience in NoVA schools aka the United Nations, diversity is a bit lacking here in Seattle.  I loved that the boys were exposed to kids of completely different ethnicity, religion, and economic circumstances each day at their old schools.  I'll never forget some of the things Asher said as he tried to process all of the differences in his classmates in NoVA: "Inniyah is spending Ramadan in Indiana" actually she and her family traveled to 'India'.    In Seattle's defense, I would bet the only other place in America as diverse as NoVA is New York City.  Seattle certainly isn't completely void of diversity.... it just isn't quite as rich.

- Other things.  The school day is almost 2 hours shorter here compared to NoVA (factoring in bus rides).  There are more male teachers than female teachers at Asher's school, but the principal is female.  However, there are very few non-white teachers and staff.  Kids here know and sing their school song.  Kids can eat and drink in the classroom as long as they are eating fruits or vegetables and drinking from their water bottle.  Asher says he has a lot of time to draw and read independently during the day.  Besides Winter and Spring Breaks, the kids get the entire week off for Thanksgiving as well as a week for mid-winter Break in February.  To cross the streets near the school without a crossing guard posted, there are orange flags in a bucket fastened to a post or telephone poll.  You simply grab a flag and carry it with you through the crosswalk...then place it in the bucket on the opposite side of the street.  Ed is always amazed that the flags are never stolen.   PE includes a unit on unicycling, rock climbing, ultimate frisbee, and Parkour.  The 100-year old gym has no storage so all equipment is strung up from the red brick walls. It actually looks really cool!

P. S.  The very best thing this school year has been having Noe and Asher attend the same school for the first year EVER!  The school is a 5 minute walk from our house and we can see the Space Needle en route.
Posted by Jen at 11:39 PM No comments: