Noé brings a lot of joy and laughs (and some frustration as well) to our family.

"NOT ON THE COUCH!" I shouted. He promptly picked up the iPad and left the ice cream bar on the couch cushion.

He is also obsessed with my slippers. Whenever I look for them, I inevitably find them on Noé's 15 year old feet. The other morning, he REALLY wanted to wear them to school. I thought we were going to have a showdown of wills. Then I told him, "Noé, it's just not cool for an eighth grader to wear his mom's slippers to school."

He looked at them longingly, then took them off and carefully lined them up next to the other shoes before putting on his sneakers.
Posted by Jen at 10:44 AM 1 comment:

Ode to the RadWagon 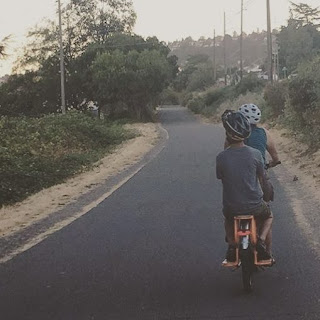 One of my biggest pleasures in life is riding my bike, or really any bike. When we moved to Seattle, I hoped to make it a full family affair. Maybe we could even sell our car and use our bicycles as our primary mode of transportation.

That fantasy hasn't played out, but we're getting closer to a car-free life, thanks to our RadWagon.

Probably the biggest obstacle to our car-free utopia was Noé's inability to ride a bike independently. He can balance himself on a bike and ride in an open area, but I can't trust him to ride the highly-trafficked streets of Seattle. Maybe we'll get there eventually, but not today.

Soon after our move to Seattle, I was itching to ride the city with my boys. I looked at SO many cargo bike options. They were SO expensive. And SO heavy to ride up and down the hills of Seattle. Meanwhile, Noé just kept growing and getting heavier. I *almost* purchased a tandem bike for him last spring, but changed my mind. I know Noé pretty darn well. I knew he wouldn't pedal if he knew I was pedaling, too. I could picture myself trying to haul the bike, with Noé still sitting on it, up some of Seattle's cliff-like hills. Seattle Hill Hell. I knew it would become miserable and that we would eventually stop riding the bike altogether.

Later last spring, I started hearing some buzz about Rad Power Bikes. I did some research and I was impressed with the RadWagon. It was everything I wanted and needed in a bike for Noé and I. The cargo long-tail structure would be a comfortable ride for both of us. The electric assist would get us up those nasty hills. The burnt orange color was bright and badass. It was in our bike budget...far and away the best priced electric-assist cargo bike on the market. They are based out of Seattle, so I set up an appointment at their Ballard shop for a test ride in early June, but they pretty much already had me at "electric-assist-cargo-bike-under-2g."

Nine months and 500+ miles later, my love only grows for my RadWagon. Noé and I have had so many great city rides together, around the lakes of Seattle, along the Burke-Gilman trail that winds around the city, to and from summer daycamp.  He loves riding with me and often requests to do so on his iPad communication device. Many days, I'll ride him to school, even though the school is only a seven-minute walk from our house. It is a great start to the morning. Yesterday, we were riding around the lake on a sunny but cool, early-spring day and Noé kept standing up on the bike. I looked back at him and he looked so free and happy. Kind of like that famous Titantic movie scene where Jack stands on the mast of the ship. I laughed, and then I told him to sit down.

I follow the owner of Rad Power Bikes, Mike Radenbaugh, on my Instagram. He is the ultimate bachelor entrepreneur and adventure-seeker dude. I will see Instagram stories of him out on Lake Union on an SUP in the middle of winter at 6am. He seems like a good guy, but I think it's pretty safe to say that he didn't have disabled kids and their bike-crazy moms in mind when he rolled out the Rad Wagon. Much like Steve Jobs had no idea how much his Apple technologies and devices would change the lives of kids with nonverbal autism.

But I'm happy to benefit from both of their genius.