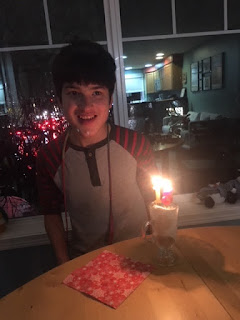 When Noé calls for me, the sound echos from deep inside himself. It's a plea that stops me cold. It is also a call of affection and love.

We fought many years for verbal communication. We had some talented, optimistic teachers and therapists dedicated to making it happen for him. We made Noé repeat his words over and over, from morning until night, hoping that initial sounds would morph into full words and then into sentences and life would suddenly click and we would have a verbal child!

After years of watching him fight and struggle for every sound with really no marked progress, and growing increasingly frustrated by not being able to truly communicate with him, we looked for new answers.

When we moved to Seattle five years ago, his new school team pushed for augmentative and alternative communication (AAC) delivered from an iPad. The iPad would be his voice.

We'd always shied away from this - we were told previously it was not implemented well in the schools. Teachers weren't properly trained on it. AAC became a crutch rather than a tool for true communication.

We were also warned that he would likely lose the few words that he had learned to say.

BUT WE NEEDED TO ABLE TO COMMUNICATE WITH OUR CHILD.

So we handed him an iPad, secured training for his teachers, found a speech therapist who specialized in kids like Noé, and hoped for the best. It wasn't a magic bullet. He was still lacking some of the fundamental skills of communication. But slowly, he started making independent requests using his iPad. Soon, he was doing much of his school work and greeting others using his iPad as his new voice.

And he lost all of his spoken words.

Usually he calls for me when he needs something and he's frustrated. Or when he's hungry. Sometimes, just before he goes to sleep and I'm giving him goodnight kisses, he'll look at me and mouth the words.

I have recurrent nightmares. Noé is lost in a forest and he's pleading for me to come to him! We are in a large crowd and someone is taking him away from me! He is struggling in the water and I can't reach him! It is always dark and murky, like a bad made-for-TV movie. I fight and struggle but I can't reach him. I jolt upright from my sleep, that three letter utterance pounding in my head.


So many people have asked. How does it feel to have a child who can't talk to you?

Being non-verbal was often described to us as the worst-possible outcome of an autism diagnosis, and it become our reality.

Today, I don't understand the question.

Of course he talks to me.

When we were moving down to Portland this past summer and Noé gathered all of his most prized possessions and put them in a box and carried the box around with him everywhere we went for an entire month, we knew exactly what he was telling us.

We tried to calm his fears with soothing words, but also with as much immediate stability as possible. We put together his bedroom before our own, and even before we unpacked our kitchen. We toured his new school and met his new teachers. We took bike rides and walks around our new neighborhood and visited all of the local parks and shops.

THIS IS YOUR NEW HOME. YOU ALWAYS HAVE A SAFE PLACE HERE WITH US.


It can be frustrating.

When Noé won't sleep, for example. Is he sick or in pain? Is he anxious? Is he just being a jerk and refusing to go to bed? Sometimes I'm not sure. Sometimes I guess wrong.

But it is not any less frustrating than when my other son has a bad day and won't tell me what is wrong.


I hear from so many fellow moms who get tired of hearing their children call for them all day long. I get it. There is a lot of mundane, thankless work (and lost shoes) in the frayed edges of parenthood.

But will I ever tire of hearing both of their voices call for me? Never. It's complicated bliss.