'How Does It Feeeeeeel?' 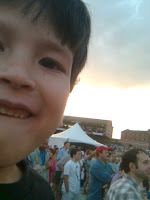 In my continuing quest to find ways to connect with Noe, I've hit on music. I've mentioned the bike, which he continues to happily obsess over, and lately it seems Noe has taken a liking to music. I've put together a collection of jazz CD's for the player in his room so whenever he finishes up his therapy, he can unwind with some Miles Davis, John Coltrane or Thelonious Monk. Every time I go down to check on him, he's swaying with a big smile on his face.

On Friday, I decided to ramp up the music education by taking him to his first rock concert. The site was Ripken Stadium in Aberdeen, Md., and the headliner was Bob Dylan. He's touring minor-league baseball stadiums this summer with Willie Nelson and John Mellancamp. Yes, it sounds quirky but they actually make it work. 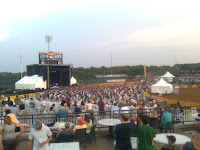 The reason I chose this show was because it started at 5:30 and kids 14 and under were admitted free. And with general admission seating, we could wander the grounds, even getting a chance to run around on the field in between acts. As you can see by the video below, Noe LOVED kicking off his shoes and feeling the neatly-trimmed grass under his feet.

It turned out to be a longer day than anticipated. Traffic was nightmarish getting up there due to a nasty wreck on the Beltway, which then led to us hitting rush-hour traffic in Baltimore. By the time we got there, we had missed most of Willie Nelson's set, which actually wasn't the worst thing in the world. I just felt bad making Noe sit in the car for four-plus hours (it's supposed to take us 90 minutes to get there). And then a huge thunderstorm blew past, delaying the proceedings for a while.

Mellencamp did his thing, there was another break (and opportunity for Noe to run), and then Dylan came onstage at 9:10.

It was the moment I had been waiting for ever since I bought the tickets in early May, and now I was feeling apprehensive. I was hoping so much that Noe would like this, but it was so late in the day and we'd already had quite an adventure getting to Ripken Stadium that I was fully expecting him to melt down because he was probably tired.

Much to my amazement, he begged me to put him on my shoulders so he could see above everyone (we were down at field level, so there was no seats) and he stayed put for the entire 90-minute, 14-song set that Dylan and his band performed. From the opening riff of "Leopard-Skin Pill-Box Hat" to the closing notes of "All Along the Watchtower," he took it all in happily from his perch. 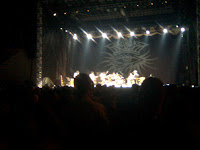 (And if I may play "Dylan Geek" for a moment, it helped that he was in good form -- for him -- and that he picked some cool songs. For someone of his stature, it shouldn't be hard to put on a good show every night, but somehow he always manages to throw a clunker or two on every tour. But luck was on our side Friday night.)

Noe looked so happy that someone sidled up to me late in the show and said: "Indoctrinating your son to Dylan at a young age? You are doing an excellent job as a parent!"

Well, probably not. And whether or not I take Noe to a Dylan concert is irrelevant to how I measure up as a dad. But I think Noe appreciated the quality time we got to spend together. And I certainly appreciated finding another way to reach out to Noe, not to mention the indelible memories I now own.
Posted by Ed at 10:03 PM 2 comments:

Asher just finished swimming lessons at our neighborhood pool. His class evaluation read like this:

"Asher wears a smile to class everyday. He still has some skills to work on. Please register him for the previous swim class next session."

Translation: Your son is enthusiastic but has no talent. You are one of THOSE parents who think their child is PERFECT in every way and WITHOUT FAIL you stick them in the most advanced class regardless of their true abilities. GET A CLUE!

Rebuttal: I am in charge of registering the boys for swim lessons, but Ed is always the one to take them. (I work on Saturdays and during the summertime....prime swimming lesson times).
I have a strong suspicion that Ed spends swimming lesson time with his nose in a book or fidgeting with his iPod, so his analysis of their swimming abilities is pretty useless and I am left guessing when registration time rolls around.
Posted by Jen at 3:12 PM 5 comments: 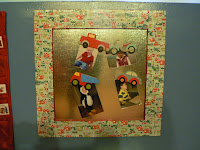 My younger sister constructed this fun, colorful magnetic board for the boys' birthdays last winter. She decoupages the frame and constructs the magnets. The colors and transportation theme go perfectly with the boys' room. I've been meaning to post a photo FOREVER, and unfortunately, this one doesn't do it justice (hello BACKLIGHTING)...but trust me...it is da BOMB! She has also made superhero themed boards and has ideas for many more.
Can anyone say Etsy? (I've been trying to talk her into opening a shop for awhile!)
Posted by Jen at 7:08 PM 1 comment: 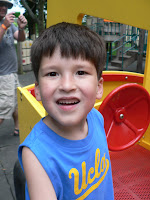 I've gotten used to this smile.
We have seen more and more of it
the past year and a half.
Noe still has his moments and his days
(don't we all?)
but I think this smile is here to last. 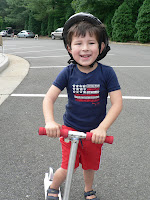 (here is Asher on a borrowed scooter,
celebrating America the best way a 4-year old
boy knows how)

Asher had high hopes for his 4th of July celebration. It had been marked on his big, giant calendar in red, white and blue for weeks! Unfortunately, I think the day fell a bit short for him.

We started the day off early at our church. They have some fun traditions revolving around the 4th, including a pancake breakfast followed by a bike parade. For the bike parade, all of the kids decorate their bikes and scooters, and then they race around the circular church parking lot to the sound of patriotic music. Noe and Asher were flying around the parking lot with the other kids, when Asher's bike tire popped. Unfortunately the support van (my old Buick) didn't have any spare tubes, so Asher was sidelined until some very nice girls shared their scooter with him.

In the evening, Ed had to work, so I planned a mini celebration with the boys involving ice cream, sparklers and glow snakes. I didn't feel ready to light anything that flew off the ground or whistled, at least without parental backup, so we went decidedly low tech. The glow snakes were a hit. So was the ice cream, of course. Then I lit sparklers for the boys. Noe loved the visual effect. I lit Asher's sparkler and he immediately threw it down....onto his bare foot.

Yeah, I think the red scar on his foot will be a permanent reminder not to do that again.
Posted by Jen at 7:10 PM 3 comments:

A couple of recent "only Asher" moments...

Scene No. 1: We were getting the boys juice, and we served it in these small plastic cups. Asher's just happened to be pink. No big deal, right? Well....

Asher: "Because I'm not a princess!"

He's not exactly a prince, either.

Scene No. 2: At a playground in Pittsburgh, I finally found a time when it was bad that Asher already knows how to read. He's really taken to reading books and whenever he runs across a word he doesn't recognize, we tell him to sound it out. Well, in this particular instance...

Asher, standing at the top of the slide, notices some graffiti: "For. A. Good.... what's this spell, papi?"

Asher has decided to marry Noe.

It's all a grand and elaborate plan to collect more trains. When Asher got word that you receive gifts and eat cake when you get married, he was suddenly all about getting hitched. When I explained that I married his Papi, apparently Noe was the most logical choice for him. In Asher's words...."then Asher will marry Noe.....and we'll eat cake.....and we'll get trains for presents....and then Asher will play with the trains." THE END

This is just so disturbing on so many levels, I don't even know where to begin....
Posted by Jen at 7:07 PM 4 comments:

The Boys that Saved Pittsburgh* 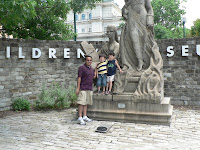 *adapted from cheesy 1970's basketball classic, The Fish that Saved Pittsburgh. A thousand points to anyone who has actually seen it.

We had a relaxing drive to PA but bad Arby's...we'll be crossing that one off our safe fast food list. It was great to see our good friends, the Norths, and our most favorite under-hyped (in that it is such a cool place but nobody really knows it) city in America.

The North girls were so sweet to Noe and Asher. Asher followed all three of them around in a lovesick puppy haze. Noe also did his share of following and admiring. We ate the biggest pancakes in the world and played a lot in the vast open spaces of the North's backyard. Friday evening we ate at a Peruvian restaurant in the Strip District and went to a Pirates game. After some thunderstorms, the night turned out perfect....and the game was short and sweet. PNC Park has such an amazing view of the rivers flowing through Pittsburgh's downtown. The boys enjoyed spotting boats out on the water when the game could not hold their interest.

Saturday we went back to the city for a day at the Children's Museum ... another favorite. I was pleased to see Noe's improved play skills from a year ago (the last time we visited the museum). Last year, I spent most of my day chasing him through the museum. This year he had long periods of appropriate sustained play and seemed to really enjoy himself.

I truly believe Pittsburgh is the most underrated city in America. It is a perfect size and has so much character and history. The sports scene is great. There is a strong academic and arts base, but plenty of diversity. Every time we go I like it more and more. Don't even get me started on how affordable it is compared to other cities that we've lived in.....

Here's to a good weekend away.... minus our 30 mile detour to retrieve Asher's beloved Bear and the deer that we saw in our headlights that too freakishly resembled George W. on our trip home.
Posted by Jen at 4:09 PM 4 comments: