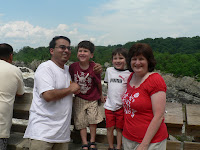 We had a great visit with my mom last week. We hit all the usual spots, including Great Falls on the Potomac River (see pic). My mom is one busy woman with lots of demands on her time. We were glad for the time we had with her. Can't wait to see you in August, Grandma!
Posted by Jen at 1:44 PM No comments:

Robin Williams had a scene in "Good Will Hunting" in which he's explaining love and relationships to the Matt Damon character that always stands out to me: "You're not perfect, sport, and let me save you the suspense: this girl you've met, she's not perfect either. But the question is whether or not you're perfect for each other."

Through nearly eight years of marriage, me and Jen have fit in that "perfect for each other" category quite well. A key reason for this has been plenty of shared interests and passions.

One of these is basketball.

It wasn't what sealed the deal during our courtship, but it didn't hurt knowing my future wife was a basketball junkie. She was the one who finally got me to watch "Hoosiers" (I know, I know, what took me so long?) and she was always willing to watch old NBA games with me, especially if they involved Danny Ainge, her favorite player. When we moved in together after our wedding, we discovered we now had two copies of "Sacred Hoops."

And she continues to this day to have the best jump shot in the family.

But as much as we enjoy basketball, that love gets severely tested every spring. You see, that's when the NBA playoffs start and Jen is married to a Lakers fan. And as she's documented on this blog, I fret quite a bit during games -- to put it mildly.

I was thinking back recently and I realized in the nine years we've known each other, the Lakers have won four NBA championships, reached the Finals two other times and missed the playoffs only once.

That's a lot of frantic pacing and patience testing over the years.

Jen always tries to watch with me, but usually by the fourth quarter, she clears out. Especially if it's a close game. She knows what this is like, having grown up during THIS time in Portland Trail Blazers history.

I realize it's silly behavior and I often wonder why I care so much, especially when 10 years of working in sports journalism has left me pretty jaded. But for whatever reason, the Lakers have stayed with me, going on 25 years now. Maybe it's regional pride or deep-seated tradition, as my colleague Michael Wilbon described in a recent column. Much as I dislike Kobe Bryant for a variety of reasons, it's hard not to watch and share the ups and downs of a long playoff run with my fellow fanatics -- Mom, Dad and my two aunts.

As for Jen, I don't think I've ruined basketball for us. Yes, she's relieved when the playoffs end, but we're still here -- perfect for each other.
Posted by Ed at 2:18 PM 1 comment:

I got out of the house early to ride my bike to work on Saturday. I felt a bit in a riding zone. It was drizzling rain and relatively cool...my preferred riding conditions. The trails were quiet and slushy green from the massive amount of rain over the past few weeks. I pumped my legs hard and felt energy surge through my body. By the end of the first mile, my legs were dotted with mud. I smiled. By mile four I had completely entered a riding euphoria, when I spotted another rider in the distance. From the look of his gear (not to mention his thick, muscle-bound legs), he was definitely a serious rider. He smiled at me. Two biking souls out early to celebrate a rainy weekend morning. We shared an immediate bond, a love of the bike. As we passed, he waved hello....then asked, "Did you know your bike helmet is on backwards?"

Probably my single favorite speech from his campaign last year. 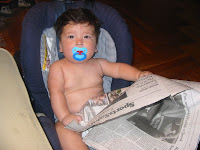 What the Guzman 4 will be reading this summer:

Ed: The Reckoning by David Halberstam (history of the US auto industry and its struggle during the 198o's) and When Nothing Else Matters by Michael Leahy (Michael Jordan's last comeback with the Washington Wizards)

Jen: I helped out a bit with the annual used book sale to benefit the local autism community and picked up some classics I haven't read since high school. These three books really made me fall in love with reading and I can't wait to spend some time this summer getting reacquainted with them (preferably poolside.)

Noe: Is into books with visual effects. He loves this scanimation series right now by Rufus Butler Seder.

Asher: Mike Mulligan and the Steam Shovel by Virginia Lee Burton. I feel like I am back in Ms. Kelsey's 1st grade class every time we read it. We are also going to try a few easy chapter books like the Henry Huggins series by Beverly Cleary.
Posted by Jen at 7:54 AM 4 comments:

These Lands End trekkers are the perfect shoes for a mom with active boys. I haven't fallen in love with a pair of shoes in a long time, but these have captured my mama heart. They are versatile enough for hiking, splashing through streams, trips to the pool or beach, or just running errands around town. When Noe bled all over them a week after they arrived in the mail, I just hosed them down and let them air dry and they were as good as new. Unlike my husband's trekkers, they don't emit foul odors and are a really comfortable fit. Best of all, I can put them on without hands, which makes the getting-out-the-door process that much faster.

The most wonderful time of the year

It's that time of year again ..... time to get ready to work full-time for the summer.
I am busy finalizing summer schedules for the boys, getting projects completed that I won't have time to do this summer, doing my version of spring cleaning, and finishing some job-related prep work. Time is ticking ....when Noe is out of school next week my time and attention will be limited.
I look forward to my summer job in many ways .... spending time away from the kids, managing whiny grown-up people rather than whiny little people, riding the pleasant 6-mile bike ride to and from work, making the extra money..... we'll see if I'm still singing the same tune in August when it's 90 degrees at 8am, my bosses are yelling at me, the house is a mess and there is nothing to eat in the fridge because nobody has time to shop.

In other news, the Post finally gave my husband back to me. He took a comp day today, which he spent digging a big hole in the front yard and taking Noe on a 10 mile bike ride in the sweltering heat of the afternoon. Poor kid came back with skinned knees and smelling like a 17 year old lineman after football practice. Right now Ed is burning holes in our hardwood floors with his manic pacing while the Lakers play Game 3.

I think I will offer to give Ed back to the Post tomorrow.
Posted by Jen at 6:31 AM 3 comments:

I didn't realize how much Asher had been on the computer lately, until I overheard him "talking computer" in a halted, monotone voice when we were outside picking up toys and bikes:
"Click on Asher to move scooter over here. BEEP!"
He cheerfully picked up his toys in this manner, so I can't decide if I should start putting strict limits on his computer time, or just go with it....
Posted by Jen at 8:17 PM 3 comments: 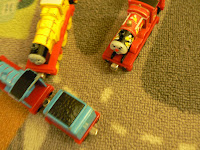 (it was the only one of the hundred he took that didn't make you dizzy to look at)
Posted by Jen at 8:20 PM 2 comments: 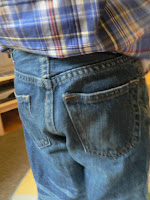 Noe seems to be shrinking on us thanks to his self-imposed Atkins diet and obsessive biking....
even his new GAP 5T slims are looking a bit baggy. Hopefully, I'll be back into my "skinny jeans" soon, too.
Posted by Jen at 8:04 PM 1 comment: