This post was pieced together with a heavy heart. By the time you read it, I will have written and rewritten this several times over.

So why write it at all? Because I want to remember the anonymous 49-year-old man in this police blotter story from Lake Havasu City, Arizona.

You see, the man in that story was my friend. And for a few years, he was one of my closest friends.

Dan Mooney was far from perfect. And even before he met this tragic demise, he had been battling demons for several years that he never shook off. Occasionally over the last several months, I would catch a glimpse of the old Dan, where he'd be quick with a one-liner or ask how my family was doing.

But I had a sinking feeling that things weren't quite right. I never imagined this would be the end result. Not even close. Of course, as a mutual friend of ours who studied human behavior pointed out, you'd have to be a skilled counselor to identify suicidal tendencies. And none of us were anywhere close to him, literally and emotionally.

We met covering Portland State football games in the fall of 2001, me for The Oregonian, he for the Associated Press. It wasn't a deep friendship then, but we hit it off. I think what first drew me to him as a friend was that he didn't take himself super seriously and was not phony or uptight.

In short, he was human. For better and for worse.

But it was once I started going over to his home that our friendship strengthened and I learned some lessons about what's important in life. I had just gotten married the previous summer, so I had hopes of one day getting to what he seemed to have: a stable home, with a spouse and child, etc. I realize things are never perfect, but it was still a good example for me as a husband and future father.

He never claimed he had all the answers and he wasn't telling me what to do, but one thing he did say stuck with me all these years later. He once told me that at the end of the day, the most important thing in the whole world is family. You might face professional disappointment, friends may come and go, but if you are loyal and loving to your family, that's all you'll ever really need.

It sounds like common sense, but until you go through life and experience its ups and downs, you never really know how true that is. As a transplant living far from our extended family, I always remembered that bit of advice. And yes, I can say my family is very tight-knit because we realize in this far-away place, we pretty much only have each other. It's a quality that's served us well as we've endured Noe's autism.

During one of our last conversations, I mentioned this to Dan, how I always remembered this piece of advice. I made sure to say thank you. And I'm glad I did.

I wish there was a happier ending to the story. He is survived by a son who turns 17 next month. I cannot begin to even fathom the anguish he must be feeling right now, and my thoughts and prayers continue to be with him.

I can almost hear Dan now, busting my chops for ending the post with this clip. He'd say it's too on the nose, since he was Irish and all. But considering my mood, this feels right. In light of this awful news, little else has this week. 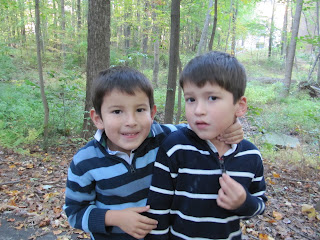 My boys show their heritage by the season: Northern European in the winter.... 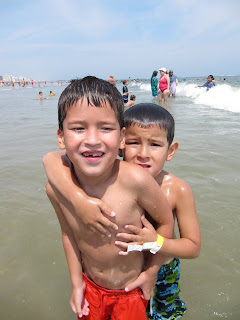 And all Mexico in the summer.

It was inevitable. The boys had been sick earlier in the week. I spent a day with stomach pains and a buzzing headache. A stomach bug had crept into our Northern Virginia townhouse and that meant two things: Easy Ed was next and it would be bad.

Sure enough, late late the other night I awoke to the sound of retching vomit. Oh, it is a dreadful noise. When Ed throws up, it sounds like animals are dying.

And Ed vomits a lot.

A couple months back, he informed me that he had gotten sick on the way home from work. Oh no, I replied, Did you throw up in the car? No, he replied. I pulled into an abandoned parking lot and opened the door.

At 2am. In the District of Columbia. Did I mention my husband is Hispanic?

Since then I keep my cell phone by my bed, just in case I have to take a late night call from the county jail after Ed's been booked on suspicion of DUI.

For Ed, the formula is pretty simple:

When we were first married, I admit it was a bit disconcerting to have a husband who threw up much more often than I did. Did he have an ulcer? I wondered, Could be possibly be bulimic? (No and definitely no). But soon enough the tables turned and I found myself pregnant and sick. And also very alone and stressed out as I finished up grad school in Portland while Ed chased his dreams in the big city. I couldn't wait to join him in New York. I had this fantasy of Ed lovingly holding back my hair while I threw up, and then cleaning up the mess and bringing me a ginger ale while I rested in bed.

The reality was that I threw up alone when I got to New York as well. The only difference was that now I was in our prewar apartment bathroom with sounds of the city outside the window ..... and, of course, sounds of Ed snoring from the other room.

When I heard Ed sick the other night, I rolled over and stuck an extra pillow over my head to drown out the wailing struggle from the bathroom beyond. I tried to make myself feel guilty for not getting up with him, but I couldn't even manage that much.

Eleven Valentine's Days, ten years of marriage and two children later, I am beginning to understand the multiplying effect of love in a happy and deeply committed relationship. I am also learning that you don't need to share everything with your partner during your years together to experience the intensity of that kind of love.