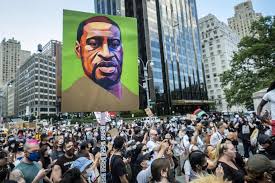 The boys and I decided to hike this afternoon and as we drove away from the house I turned on NPR. They were announcing that the George Floyd verdict was imminent.

Pandemic year note: The boys are still doing CDL and I'm working part-time so Tuesday afternoons are free, and now that the sun is out, I'm not complaining quite as much!

Asher and I talked about the trial as we listened to the NPR commentators in the car. When the judge finally announced the jury's verdict we found ourselves in the middle of a Burgerville drive thru in Gresham still en route to Oxbow Park. We held hands and closed our eyes as we braced for the judge’s words.

We exhaled pure relief and then pumped our fists out our car windows. Accountability. Not full justice. But a start.

A single detail caught my attention. He had a middle name, which was announced along with his guilt. Derek Michael Chauvin. When he was born into this world, he had a mama who held him with love and cared enough to give him a middle name. Little did she know this little baby would grow up to be the kind of man who knelt on a black man's neck for sport until the life drained out of him, and then used his police duty as a cover for his sadism. This tiny detail...his middle name...shook me to my core. You start fresh. You start full of hope. You start with a middle name from your mama ...

I hiked through the giant trees and bright green fern and along the banks of the Sandy River and looked up at the blue blue sky and enjoyed the company of my two boys. Sons I lovingly gave middle names as I held them in my arms as babies. And I pondered what it all meant and what was to come.